Wireless systems come with a lot of flexibility but on the other hand, it leads to serious security issues too. And, how does this become a serious security issue — because attackers, in case of wireless connectivity, just need to have the availability of signal to attack rather than have the physical access as in case of wired network. Penetration testing of the wireless systems is an easier task than doing that on the wired network. We cannot really apply good physical security measures against a wireless medium, if we are located close enough, we would be able to "hear" (or at least your wireless adapter is able to hear) everything, that is flowing over the air.

Before we get down with learning more about pentesting of wireless network, let us consider discussing terminologies and the process of communication between the client and the wireless system.

Let us now learn the important terminologies related to pentesting of wireless network.

An access point (AP) is the central node in 802.11 wireless implementations. This point is used to connect users to other users within the network and also can serve as the point of interconnection between wireless LAN (WLAN) and a fixed wire network. In a WLAN, an AP is a station that transmits and receives the data.

It is 0-32 byte long human readable text string which is basically the name assigned to a wireless network. All devices in the network must use this case-sensitive name to communicate over wireless network (Wi-Fi).

It is the MAC address of the Wi-Fi chipset running on a wireless access point (AP). It is generated randomly.

It represents the range of radio frequency used by Access Point (AP) for transmission.

Communication between client and the wireless system

Another important thing that we need to understand is the process of communication between client and the wireless system. With the help of the following diagram, we can understand the same − 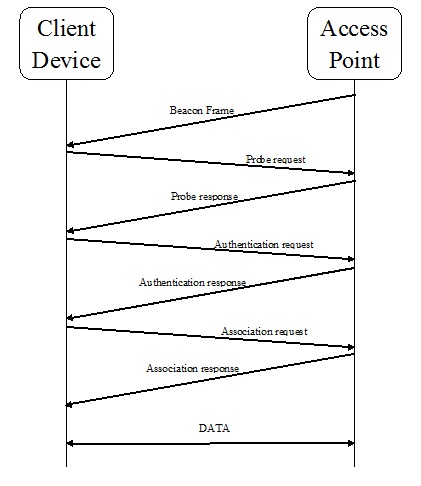 In the communication process between client and the access point, the AP periodically sends a beacon frame to show its presence. This frame comes with information related to SSID, BSSID and channel number.

Now, the client device will send a probe request to check for the APs in range. After sending the probe request, it will wait for the probe response from AP. The Probe request contains the information like SSID of AP, vender-specific info, etc.

Now, after getting the probe request, AP will send a probe response, which contains the information like supported data rate, capability, etc.

Now, the client device will send an authentication request frame containing its identity.

Now in response, the AP will send an authentication response frame indicating acceptance or rejection.

When the authentication is successful, the client device has sent an association request frame containing supported data rate and SSID of AP.

Now in response, the AP will send an association response frame indicating acceptance or rejection. An association ID of the client device will be created in case of acceptance.

We can gather the information about SSID with the help of raw socket method as well as by using Scapy library.

Following is the raw socket method, Python script, which will give us the SSID of the AP −

Now, we need to declare an empty list, which will store the SSID of APs.

Now, we need to call the recvfrom() method to receive the packet. For the sniffing to continue, we will use the infinite while loop.

The next line of code shows if the frame is of 8 bits indicating the beacon frame.

Scapy is one of the best libraries that can allow us to easily sniff Wi-Fi packets. You can learn Scapy in detail at https://scapy.readthedocs.io/en/latest/. To begin with, run Sacpy in interactive mode and use the command conf to get the value of iface. The default interface is eth0. Now as we have the dome above, we need to change this mode to mon0. It can be done as follows −

Let us now import Scapy as a library. Further, the execution of the following Python script will give us the SSID −

Now, we need to declare an empty list which will store the SSID of APs.

Now we are going to define a function named Packet_info(), which will have the complete packet parsing logic. It will have the argument pkt.

In the next statement, we will apply a filter which will pass only Dot11 traffic which means 802.11 traffic. The line that follows is also a filter, which passes the traffic having frame type 0 (represents management frame) and frame subtype is 8 (represents beacon frame).

Now, the sniff function will sniff the data with iface value mon0 (for wireless packets) and invoke the Packet_info function.

For implementing the above Python scripts, we need Wi-Fi card that is capable of sniffing the air using the monitor mode.

From the perspective of a pentester, it is very important to understand how a wireless attack takes place. In this section, we will discuss two kinds of wireless attacks −

Let us first import Scapy as a library −

Following two statements will input the MAC address of AP and victim respectively.

Now, we need to create the de-authentication frame. It can be created by executing the following statement.

The next line of code represents the total number of packets sent; here it is 500 and the interval between two packets.

Upon execution, the above command generates the following output −

This is followed by the creation of the deauth frame , which is thereby sent to access point on behalf of the client. This will make the connection between them cancelled.

The question here is how do we detect the deauth attack with Python script. Execution of the following Python script will help in detecting such attacks −

In the above script, the statement pkt.subtype == 12 indicates the deauth frame and the variable I which is globally defined tells about the number of packets.

The execution of the above script generates the following output −

The MAC address flooding attack (CAM table flooding attack) is a type of network attack where an attacker connected to a switch port floods the switch interface with very large number of Ethernet frames with different fake source MAC addresses. The CAM Table Overflows occur when an influx of MAC addresses is flooded into the table and the CAM table threshold is reached. This causes the switch to act like a hub, flooding the network with traffic at all ports. Such attacks are very easy to launch. The following Python script helps in launching such CAM flooding attack −

The main aim of this kind of attack is to check the security of the switch. We need to use port security if want to make the effect of the MAC flooding attack lessen.