Point - to - Point Protocol (PPP) is a communication protocol of the data link layer that is used to transmit multiprotocol data between two directly connected (point-to-point) computers. It is a byte - oriented protocol that is widely used in broadband communications having heavy loads and high speeds. Since it is a data link layer protocol, data is transmitted in frames. It is also known as RFC 1661.

The main services provided by Point - to - Point Protocol are −

Point - to - Point Protocol is a layered protocol having three components − 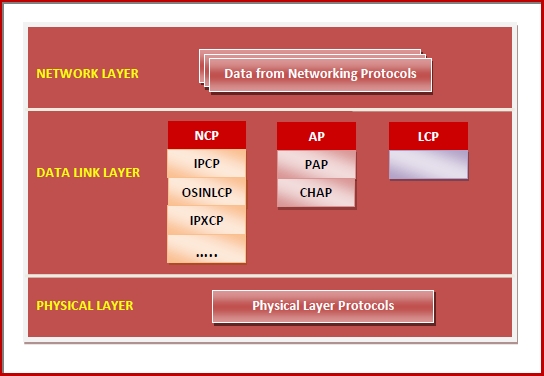 PPP is a byte - oriented protocol where each field of the frame is composed of one or more bytes. The fields of a PPP frame are −

Byte Stuffing in PPP Frame − Byte stuffing is used is PPP payload field whenever the flag sequence appears in the message, so that the receiver does not consider it as the end of the frame. The escape byte, 01111101, is stuffed before every byte that contains the same byte as the flag byte or the escape byte. The receiver on receiving the message removes the escape byte before passing it onto the network layer.