Phalcon is introduced as one of the recent frameworks of PHP, developed by a group of enthusiastic developers. Phalcon is a loosely coupled framework, which means it allows its objects to be treated like glue components, based on the needs of application.

Phalcon offers some unique features in comparison to other frameworks (traditional or existing) in PHP. Following are some of the most prominent features of Phalcon −

The performance of Phalcon is a feature which distinguishes it from other traditional frameworks of PHP. Phalcon has a combination of both PHP and C; each of them can be used as a standalone module. The compilation of every request is considered on a higher speed in Phalcon which makes everything seem out-of-the-box. 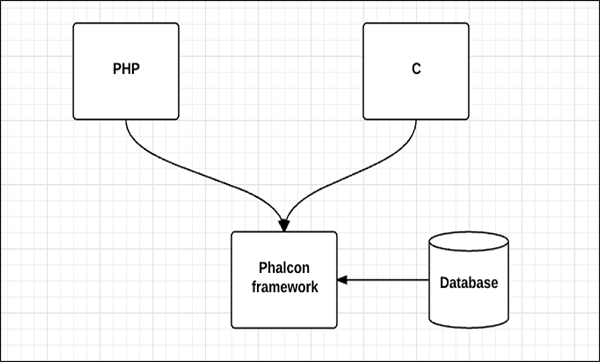 Phalcon is compatible with C which increases the compilation rate. Also, C in combination with Phalcon provides Object Relational Mapping (ORM) which provides consistency with models created. Every model created in Phalcon is associated with the table of relational database. ORM in Phalcon is purely implemented in C.

Developer tools are used for developing web application. These tools help in generating scaffold application with a combination of all features (C – Create, R – Read, U – Update, D – Delete). Developer tools also include extensible support for third party libraries to be implemented in Phalcon.

Phalcon Vs Other Frameworks

The following table highlights how Phalcon differs from other popular frameworks such as Yii and Laravel.