Hippolyte Marié-Davy first discovered the instrument, the periscope, for naval purposes during the second half of the nineteenth century. The word periscope has arrived from the association of two words, "peri" and "scope", where peri means "around" and scope means "viewing instrument". However, during the 15th century, it is said that Johannes Gutenberg, has invented the periscope in order to look above people's heads during a parade. Later this technique was applied for better navigation in submarines.

A periscope is defined as an optical apparatus that basically follows the shape of a tube, and which has a set of prisms or mirrors. The observers to see behind high obstructions that are faced by the observer use them. In simpler terms, one can use this apparatus to see things that are basically out of sight.

The submarines earlier extensively used this instrument so that they can see things that are out of their vision, which means that they are on the surface of the sea (Mammothmemory.net, 2022). However, this apparatus makes use of the principles of ''Laws of Reflection''.

A periscope is developed by some vital parts that consist of a tube, prisms, a set of mirrors, lenses, and an eyepiece. The tube forms a ''Z'' shape and at one end there lies the eyepiece, through which the observer will look through. Two plane mirrors are used that are placed at an angle of 45o and they are set in a parallel way to the other place of the existing mirror. 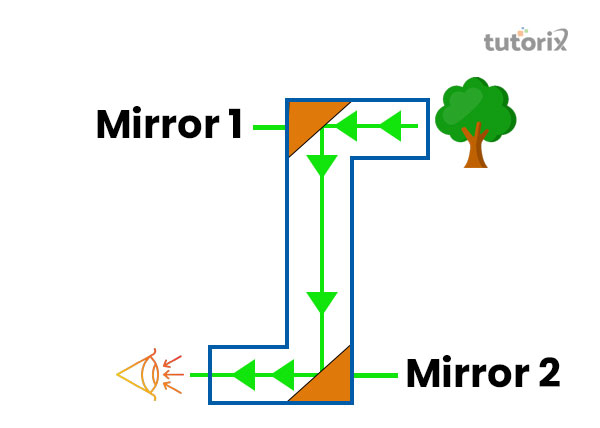 The apparatus of the periscope follows the ''Laws of Reflection''. In simpler terms, as the ray of light enters the tube it falls on the mirror that is placed at an angle of 45o .

After which the light is reflected by the other mirror that is placed on the other corner of the tube at 45o angles. Following this, the ray of light enters the sight of the observer. However, the light ray gets reflected two times before reaching the eye of the observer. The working of the periscope is displayed in the above-given image in figure 1.

It is to be noted that the image that is formed in the plane mirror displays the characteristics of an image as ''laterally inverted'' and ''virtual'' in nature (Nasa.gov, 2022). When again the image gets reflected in the second mirror then the image does not display lateral inversion. 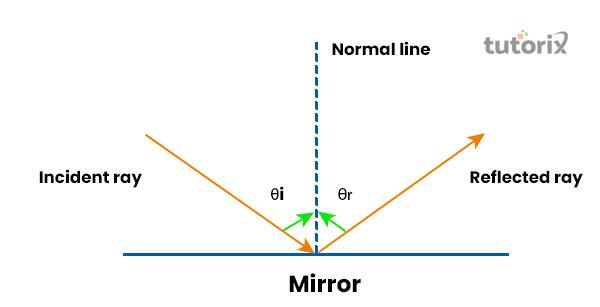 In simple terms, the ''laws of reflection'' states that, when a light ray falls on the plane surface of the mirror, the ''incident ray'', the ''reflected ray'' and the ''normal'' lie on the same plane (Scienceabc.com, 2022).

This in turn states that the angle of incidence ray to the normal is equal to the angle of the reflected rays with the normal drawn at the point of intersection of reflection.

What is the difference between a periscope and a telescope?

In this lecture notes, we find an extensive study about the periscopes. Although the periscope was invented long back ago, analyzing the principles that are followed by the periscope is the basic ''Laws of Reflection''. This signifies the basic rule for reflection, where the angle is equal to the angle of reflection and the angle of incidence. This allows the image to reach the viewer easily, however, due to the presence of two plane mirrors, the images change from inversion to the formation of erect images. Several benefits are noticed with the application of periscopes as it is highly used in the battlefield and medicinal fields, as its advanced stage is known as the technology of endoscopy.

Q1. Why is the structure of the periscope ''Z shaped''?

The structure of the periscope is "Z shaped" as it supports seeing the objects that are at a certain height. In addition to this, the light ray that enters needs to get reflected in the other mirror, so that the viewer can see the image. For this reason, only the periscope displays a "Z shaped".

Q2. How in the field of medicine are periscopes used?

The periscopes are used in the medicinal fields, as they assist in several diagnostic techniques. Furthermore, it is used as a part of methods that are less obtrusive in nature.

Q3. What types of mirrors are used in periscopes and floodlights?

Q4. What property is used in periscopes?

The property that is followed by the periscopes is the phenomenon of reflection. Through the reflection of images, it is quite difficult to get a view that is out of the sight of the observers.