Telecommunications traffic continues to grow at a very fast pace. This is accelerated through the increasing volume of data and mobile traffic, especially in India, through the recent liberalization of the telecommunications market. A solution can be adopted to meet the ever-increasing traffic requirements based on a combination of WDM, SDH, and IP transport technologies. 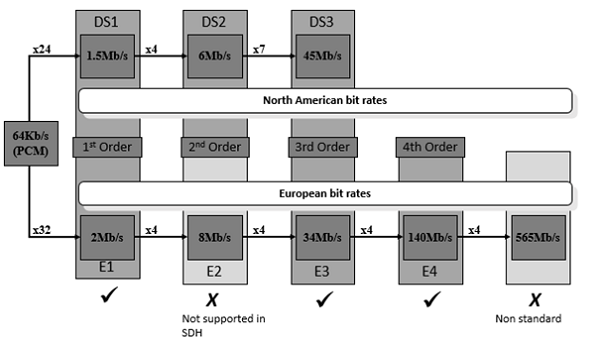 A line system is the system to the PDH network topology. Traffic is added and dropped only at the endpoints of the network. Terminal nodes are used at the end of the network for adding and dropping the traffic.

Within any SDH network, it is possible to use a node known as a regenerator. This node receives the high order SDH signal and retransmits it. No lower order traffic access is possible from a regenerator and they are only used to cover long distances between sites, where the distance means that the received power would be too low to carry traffic.

A ring system consists of several add/drop muxes (ADMs) connected in a ring configuration. Traffic can be accessed at any ADM around the ring and it also possible for traffic to be dropped at several nodes for broadcast purposes. The ring network has the benefit of offering traffic resilience, if there is a fiber break traffic is not lost. Network resilience is discussed in detail in a subsequent chapter. 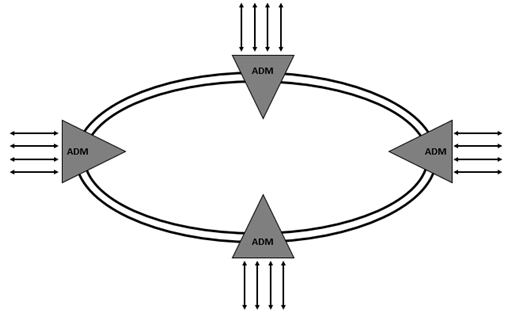 While PDH networks were not centrally synchronized, SDH networks are (hence, the name synchronous digital hierarchy). Somewhere on the operator’s network will be a primary reference source. This source is distributed around the network either over the SDH network or over a separate synchronization network. 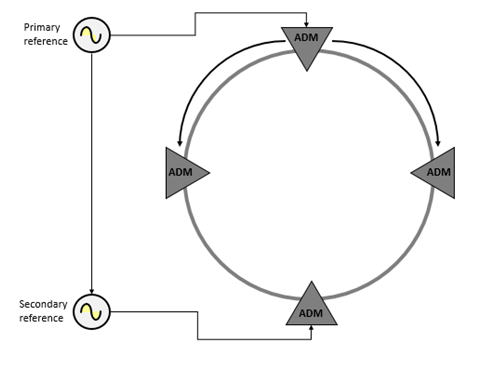 Each node can switch to backup sources, if the main source becomes unavailable. Various quality levels are defined and the node will switch the next best quality source it can find. In cases where the node uses the incoming line timing, the S1 byte in the MS overhead is used to denote the quality of the source.

The lowest quality source available to a node is generally its internal oscillator. In a case where a node switches to its own internal clock source, this should be remedied as soon as possible, as the node may start to generate errors over time.

It is important that the synchronization strategy for a network is planned carefully. If all the nodes in a network try to synchronize off its neighbor on the same side, you will get an effect called a timing loop, as shown in the above figure. This network will quickly start to generate errors as each node tries to synchronize off each other.

The following figure shows how the payload is constructed, and it isn’t as scary as it looks at first. 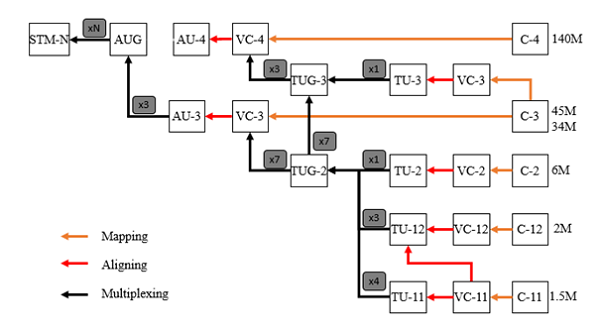