In this chapter, we will be covering the fundamentals of Windows. To create a program, also called an application, you derive a class from the MFC's CWinApp. CWinApp stands for Class for a Windows Application.

Let us look into a simple example by creating a new Win32 project.

Step 2 − You can now see the New Project dialog box. 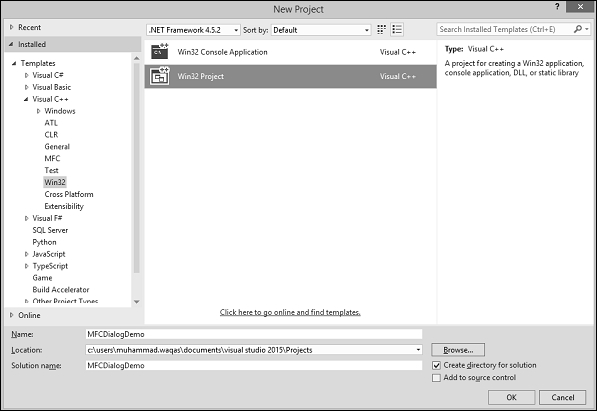 Step 5 − Enter the project name ‘MFCWindowDemo’ in the Name field and click OK to continue. You will see the following dialog box. 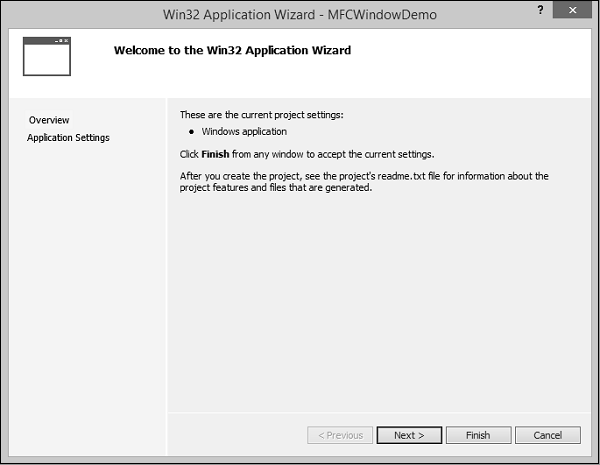 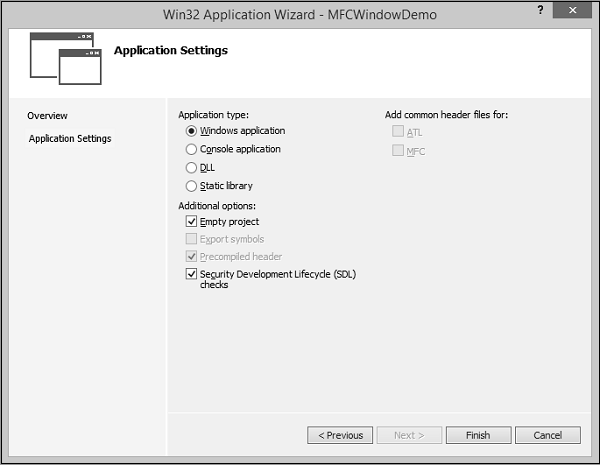 Step 7 − Select the options as shown in the dialog box given above and click Finish. 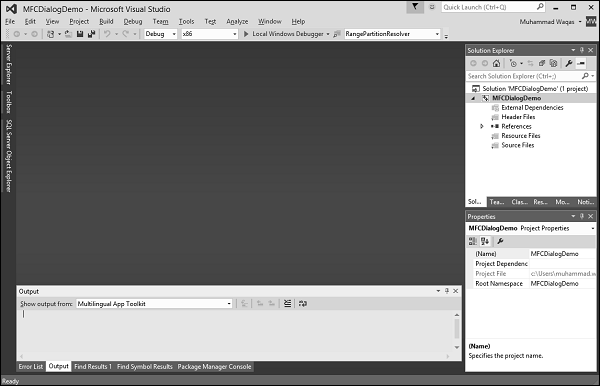 Step 8 − An empty project is created.

Step 9 − To make it an MFC project, right-click on the project and select Properties. 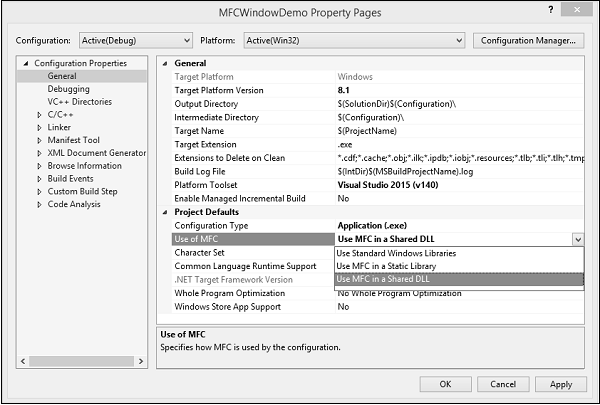 Step 11 − Select the Use MFC in Shared DLL option in Project Defaults section and click OK. 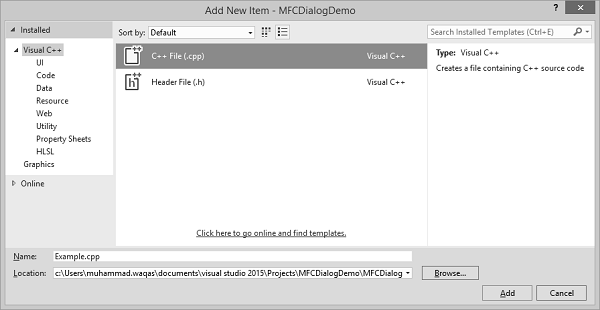 Step 15 − Set the Name as Example and click Add.

Any application has two main sections −

Let us create a window using the following steps −

Step 1 − To create an application, we need to derive a class from the MFC's CWinApp.

Step 2 − We also need a frame/window to show the content of our application.

Step 3 − For this, we need to add another class and derive it from the MFC's CFrameWnd class and implement its constructor and a call the Create() method, which will create a frame/window as shown in the following code.

Step 4 − As you can see that Create() method needs two parameters, the name of the class, which should be passed as NULL, and the name of the window, which is the string that will be shown on the title bar.

After creating a window, to let the application use it, you can use a pointer to show the class used to create the window. In this case, the pointer would be CFrameWnd. To use the frame window, assign its pointer to the CWinThread::m_pMainWnd member variable. This is done in the InitInstance() implementation of your application.

Step 1 − Here is the implementation of InitInstance() in CExample class.

Step 2 − Following is the complete implementation of Example.cpp file.

Step 3 − When we run the above application, the following window is created. 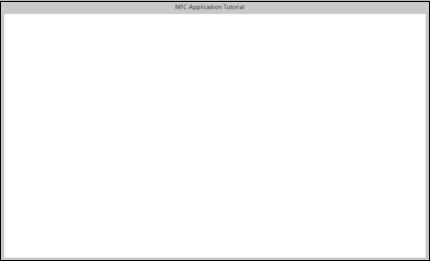 Windows styles are characteristics that control features such as window appearance, borders, minimized or maximized state, or other resizing states, etc.

Step 1 − Let us look into a simple example in which we will add some styling. After creating a window, to display it to the user, we can apply the WS_VISIBLE style to it and additionally, we will also add WS_OVERLAPPED style. Here is an implementation −

Step 2 − When you run this application, the following window is created.

You can now see that the minimize, maximize, and close options do not appear anymore.

While a point is used to locate an object on the screen, each window has a size. The size provides two measures related to an object.

The Win32 library uses the SIZE structure defined as follows −

Besides the Win32's SIZE structure, the MFC provides the CSize class. This class has the same functionality as SIZE but adds features of a C++ class. It provides five constructors that allow you to create a size variable in any way of your choice.

When a Window displays, it can be identified on the screen by its location with regards to the borders of the monitor. A Window can also be identified by its width and height. These characteristics are specified or controlled by the rect argument of the Create() method. This argument is a rectangle that can be created through the Win32 RECT structure.

Besides the Win32's RECT structure, the MFC provides the CRect class which has the following constructors −

When you run this application, the following window is created on the top left corner of your screen as specified in CRect constructor in the first two parameters. The last two parameters are the size of the Window. 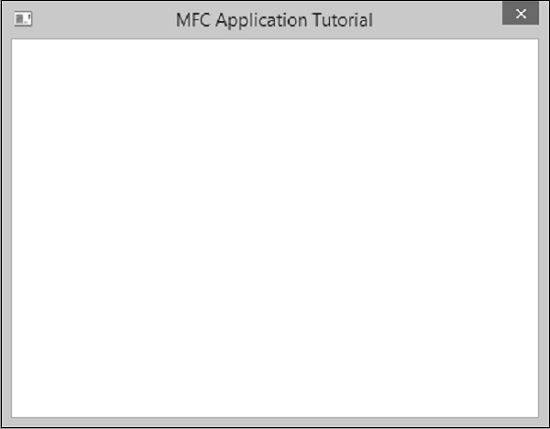 In the real world, many applications are made of different Windows. When an application uses various Windows, most of the objects depend on a particular one. It could be the first Window that was created or another window that you designated. Such a Window is referred to as the Parent Window. All the other windows depend on it directly or indirectly.

Let us look into an example which has only one Window, and there is no parent Window available, so we will pass the argument with NULL value as shown in the following code −

When you run the above application, you see the same output.