Make the Arduino sleep and then wake up

In this article, we will, as the title suggests, make the Arduino sleep, and wake it up using an interrupt. Arduino’s microcontroller, ATmega328P has 6 sleep modes, of which 5 are available with the avr/sleep.h library. Each mode has different wake-up modes and different power consumption.

Arduino’s microcontroller, ATmega328P has 6 sleep modes, of which 5 are available with the avr/sleep.h library.

Each mode has different wake-up modes and different power consumption.

The TWI Address match refers to I2C or Wire Address match. The microcontroller can wake up through this way only when it is the I2C slave, and a master sends address corresponding to this microcontroller to wake it up). You are encouraged to go through the datasheet of ATmega328P to read up more about the sleep modes.

Now, you can directly work with the avr/sleep.h library and explore the sleep modes within Arduino. An example is given here.

However, as always happens, someone has taken the effort to create a library. The library is called Low-Power. It can be found on GitHub here.

It is not available in Library Manager of Arduino IDE. The way to install such libraries has been explained here. 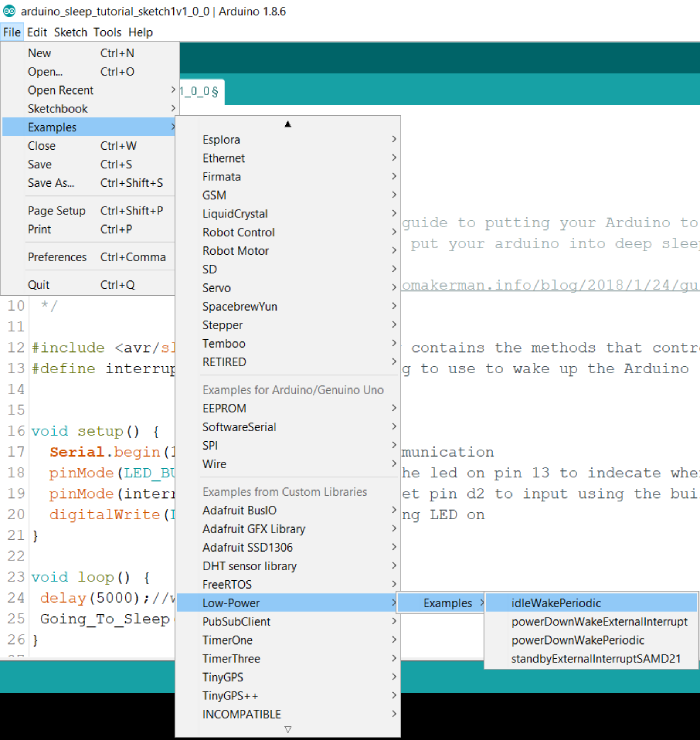 As you can see, the code is as simple as it gets. You include the "LowPower.h" library, and just have one line in loop (no setup required) −

As you can see, we are setting the Arduino in the Low Power Idle mode, disabling ADC, Timers, SPI, UART and TWI, and waking it up using the watchdog timer.

The above statement is for Arduino Uno (ATmega328P). The corresponding statements for other microcontrollers are also provided in the comments in the code.