The simplest first Julia program (and of many other programming languages too) is to print hello world. The script is as follows − 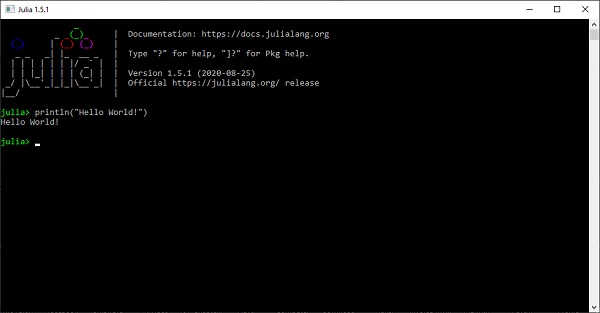 If you have added Julia to your path, the same script can be saved in a file say hello.jl and can be run by typing Julia hello.jl at command prompt. Alternatively the same can also be run from Julia REPL by typing include(“hello.jl”). This command will evaluate all valid expressions and return the last output.

Here the data can be the name of a person, place, the house number of a person, or even a list of things you have made. In computer programming, when we need to label such information, we give it a name (say A) and call it a variable. In this sense, we can say that a variable is a box containing data.

Let us see how we can assign data to a variable. It is quite simple, just type it. For example,

Here, the first variable i.e. student_name contains a string, the second variable i.e. roll_no contains a number, and the third variable i.e. marks_math contains a floating-point number. We see, unlike other programming languages such as C++, Python, etc.,in Julia we do not have to specify the type of variables because it can infer the type of object on the right side of the equal sign.

Following are some conventions used for variables names −

Writing comments in Julia is quite same as Python. Based on the usage, comments are of two types −

In Julia, the single line comments start with the symbol of # (hashtag) and it lasts till the end of that line. Suppose if your comment exceeds one line then you should put a # symbol on the next line also and can continue the comment. Given below is the code snippet showing single line comment −