Due to demand and supply, there is always an exchange rate that keeps changing over time. The rate of exchange is the price of one currency expressed in terms of another. Due to increased or decreased demand, the currency of a country always has to maintain an exchange rate. The more the exchange rate, the more is the demand of that currency in forex markets.

Exchanging the currencies refer to trading of one currency for another. The value at which an exchange of currencies takes place is known as the exchange rate. The exchange rate can be regarded as the price of one particular currency expressed in terms of the other one, such as £1 (GBP) exchanging for US$1.50 cents. 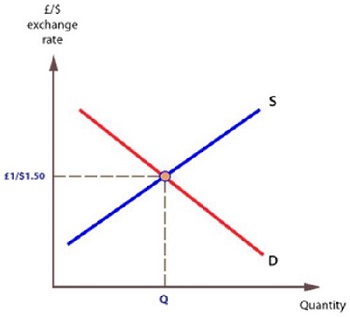 The market usually creates an equilibrium rate for each currency, which will exist where demand and supply of currencies intersect.

When exports increase, it would shift the demand curve for Sterling to the right and the exchange rate will go up. As shown in the following graph, originally, one Pound was bought at $1.50, but now it buys $1.60, hence the value has gone up. 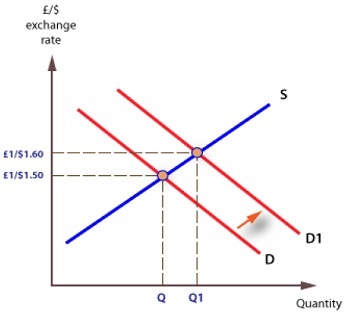