How to Fill the Entries in Parsing Table?

A parser is the second phase of compilation. The parser takes as its input tokens generated from the previous phase, i.e., the Lexical Analyzer phase, and groups them in such a way that their syntax can be recognized.

Applying Rule (2a) of the algorithm of construction of SLR Parsing Table on a set of a production of I0. Rule (2a) will be applied only when there is a terminal symbol after the dot. Consider F → ∙ (E)

Write s5 in front of Row 0 and column id

Similarly, the complete table will be filled with shift actions by processing all states from I0 to I11 in a similar manner.

Filling of Reduce Entries (r) − For filling reduce (r) entries, we have to apply rule (2b) of the construction of the SLR Parsing Table.

The production number of E → T in Question is (2)

Similarly, consider another state I3

Since T → F is production number (4) in Question

Similarly, fill up the Action table by reduce (r) entries.

Filling of goto Entries − goto Table can be filled for the non-terminals using Rule (3) of construction of Parsing Table.

Similarly, we can fill other entries in goto Table

Applying Rule (2C), there is a production.

Therefore, write "accept" in front of Row 1 and Column $.

By filling all shift, reduce, accept, goto entries, we get the following SLR parsing table. 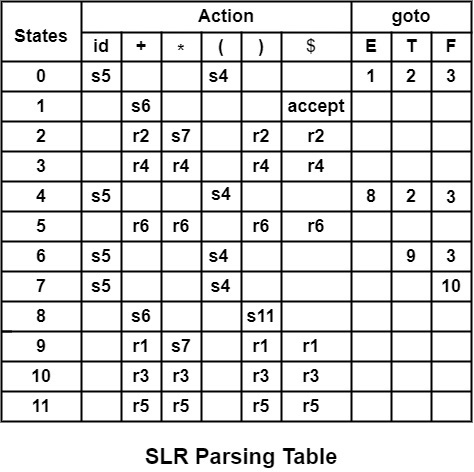