How OSPF routes the packets from source to destination?

Open Shortest Path First (OSPF) is a router protocol used to find the best path for packets as they pass through a set of connected networks.

This protocol is designated by the Internet Engineering Task Force (IETF) one of the Interior Gateway Protocols (IGPs) aimed at traffic moving around within a larger autonomous system network like a single enterprise's network, which may in turn be made up of many separate local area networks linked through routers. 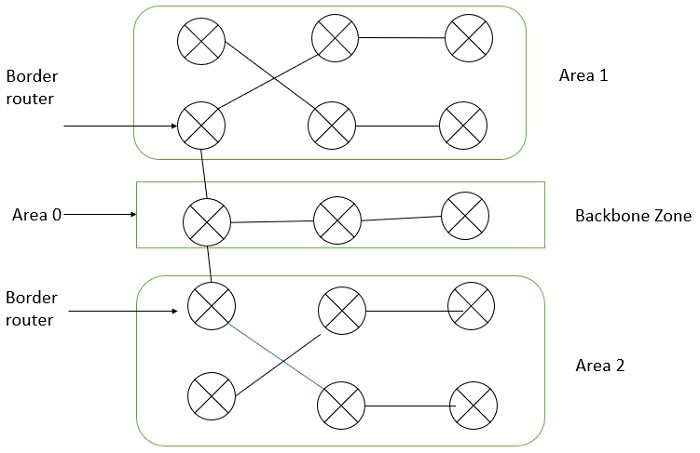 OSPF protocol is called a link state routing protocol, which maintains link state databases. The state of a route in the network is the cost. OSPF protocol allows every router to calculate the cost of the routes to any given reachable destination.

A router interface with OSPF will advertise its link cost to neighbouring routers through multicast procedure, known as the hello procedure. This network is divided into areas that can simplify administration and optimize traffic and resource utilization.

Areas are represented by 32 bit dot-decimal representation. By convention Area 0 represents the backbone zone of OSPF network as shown in above figure.

Each area must have a connection with the OSPF backbone zone. Such connections are implemented by an interconnecting router, known as an area border router (ABR) as shown in above figure.

The Border Router implements separate link-state databases for each area it is connected to and maintains summarized routes for all areas in the network. OSPF detects changes in the network topology, such as link failures, and it converges on a new loop-free routing structure in very less time.

In OSPF information is sent to every node so traffic will be very high as we have to do flooding. Link State Routing is complex as it uses Dijkstra's algorithm to find the shortest path between nodes.

The OSPF packet format is as follows −

Version − It represents the current version

Message Length − Represents the length of the message to be exchanged.

AreaId − 32-bit identifier of the area in which the node is located.