A fencing match takes place on a strip or piste. The width of the piste should be between 1.2 to 2 meter and height should be 14 meter long. Two meters on either side of the midpoint, there are two lines called en-garde lines where the fencers start before the bout. There are also two warning lines on two meters on either end of the strip to let a fencer that he/she is out of the space while retreating off the strip scores one point to the opponent. 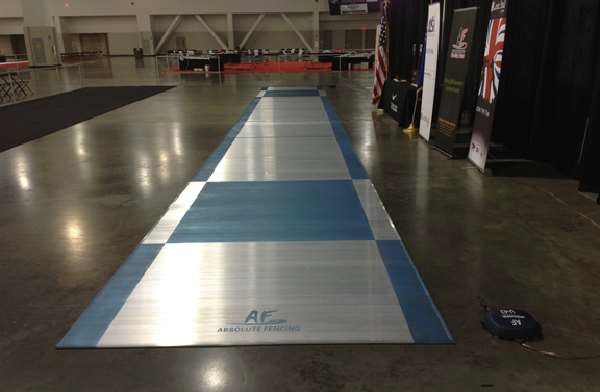 Three people are involved in the game: two fencers and the referee. The referee stands at the side of the strip. Prior to the game, the players must salute each other denying which may lead to disqualification of the fencer. After the salute, the referee calls “Engarde” while the players get ready with placing their front foot behind en-garde line and their weapons, in case of Foil, in sixte line, which is also called the on guard position. After that the referee calls for “ready?” and then “play”, and the bout starts.

A referee may halt a game during a hit, penalty or when the players go in to passivity by calling “Halt!” .Once the point is awarded after a hit, the fencers get back behind the engarde line and the game is again resumed by the referee.

In case of team events, a team of fencers comprises of four players where the 4th player acts as an alternate, but once added in the game they can’t leave again and the opposition must know about the substitution before the first round. Total nine matches are played between them each comprising of 5 points where each match has duration of 3 minutes. In a match, games are played as one on one, where a player from a team competes with another one from the opponent team. The team maximum score wins the bout. In case of tie, tie breaker rounds take place.

Three different kinds of penalty cards or flags are there in fencing. A fencer is penalised with a yellow card is warned but no action is taken. If a fencer is awarded with a red card, then one point is awarded to the opponent. In case of black card, a player gets expelled from the tournament or suspended from future games in case of serious offences.