Tough cotton or nylon and fabrics like dyneema are used to make the outfit of fencing players. These are added to high level outfits mostly in jackets, breeches, underarm protector, lame and bib of the mask. 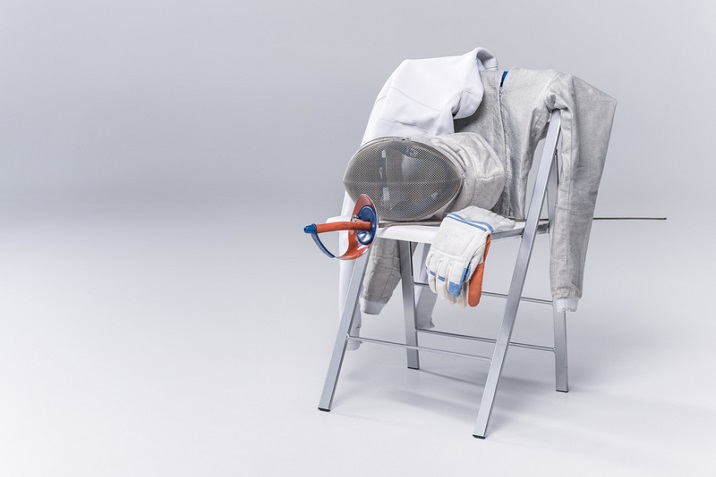 These jackets are entirely designed for fencing and are closely fitting with a special strap that goes between the legs and are used to provide adequate protection to the fencers. In case of sabre fencing, a different kind of jacket is used which is cut along the waist. A small gorget of folded fabric, i.e. a defensive material is sewn around the jacket’s collar to prevent opponents’ blade to slip in between the mask and jacket.

This is an underarm protector that is worn below the jacket and is used to provide extra protection to the sword arm, belly and some parts of the fencer’s back side. This is used as a last line of defence between your body and a broken weapon. Extremely strong to penetrate, these are mostly made of Kevlar.

Every weapon has its unique masks. There are Foil masks, Sabre masks and three weapon masks that can be used for any of the fencing weapons. The mask must be free from tears, holes or dents. Masks with transparent visor are prohibited in Foils and Epee fencing but are kept as optional for sabre fencing. 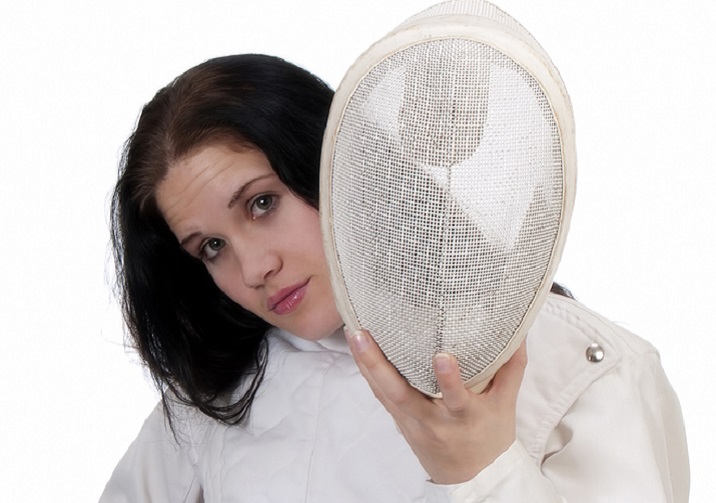 These are short trousers that ends just below the knee. They are required to overlap 10cm of the fencing jackets and are equipped with braces.

One glove is used for the weapon arm and is stretched around half of the forearm. A gauntlet in the glove prevents blade from going in to sleeves and causing injury. Easier to wear, gloves also protect the weapon hand and also provide good grip.

It is made of plastic or aluminium and is mandatory for the female fencers and is used as a chest guard. Even for males, chest guards are there but they are primarily used by the trainers or instructors rather than the fencers who mostly get hit during the training. Chest protectors are more famous in foil fencing and act as a guard against hits. 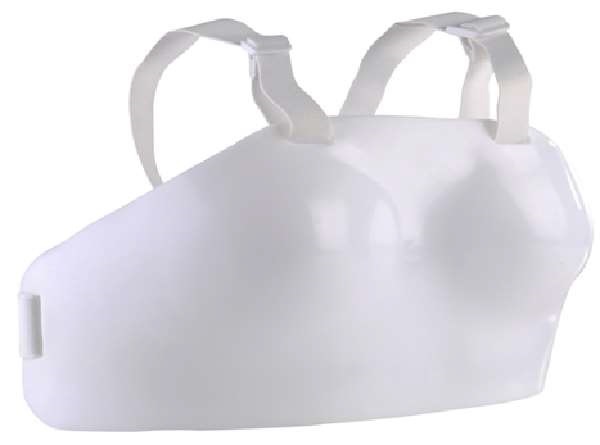 The shoes used in fencing specially designed with flat soles as well as other changes in the inside of back foot or the heel of front foot to avoid problems during lunging and they keep the fencer’s foot in place when he lunges. The socks used in fencing should cover the parts that are not covered by the knickers and the knickers should overlap them.

Three different kinds of weapons are used in fencing which are − Foil, épée and sabre. All three of them have different set of rules and strategies to play with. Most of the players usually choose to play with and specialize in any one of these weapons. The FIE blades or official blades are made of Maraging steel, which is used to resist breaking.

It is a light thrusting weapon with a maximum weight of 500 grams. Mainly designed for thrusting, it is very thin with a foiled or blunted tip. These are flexible enough to bend upon touching the opponent in order to avoid injuries. The foil has a small circular hand guard that serves to protect hand from direct stab. As hand is not a primary target in fencing, hand guard is mostly used for safety 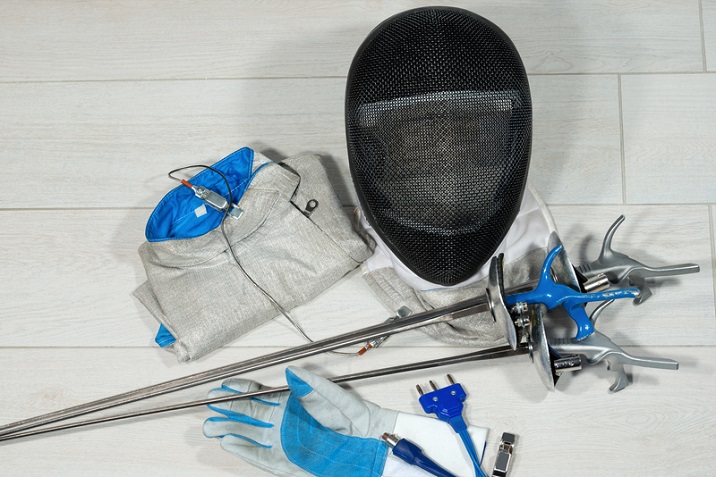 In foil fencing, a foil may target the torso (including back), neck and groin but not arms and legs. All the foil fencers wear a jacket that covers all the targeted areas, which is also called a lame. Touches are scored only with the foil tip. Hits with the side of the blade (off target touch) don’t count but don’t halt the action whereas hits on outside of the target area are not counted as scores and it also does stop the action.

Only one touch can be scored by either fencer at a time. The referee has to differentiate offence and defence. According to that, the fencer who made an offence, i.e. started the attack first against the fencer, who made a defence, gets the point. This rule is not followed in Epee fencing.

In French, Epee means sword. Epee has a v- shaped blade and also a thrusting weapon like Foil, but a little heavier in weight and stiffer than Foil, with a maximum weight of 770 grams. The hand guard in case of Epee is a large circle that is extended towards the pommel in order to guard hand effectively, which is a valid target in case of Epee. Epee fencer’s uniform doesn’t include a lame. 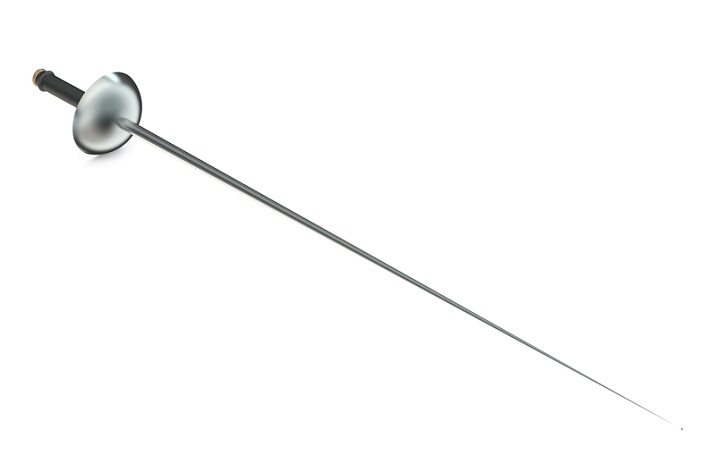 In case of Epee, there is no “right of way” rule to decide score in case of simultaneous hits by both fencers. Here both fencers are allowed scores, but in case of a tie up at the end of a match, all the double touches scored, are considered null or void.

A sabre has similar weight and length as a foil. It is a thrusting weapon as well as a cutting weapon with a weight of 500 grams. The hand guard in case of sabre is extended from pommel to the base where the blade is connected with the hilt. During the game, the guard is generally kept outwards in order to protect the hand from touches. 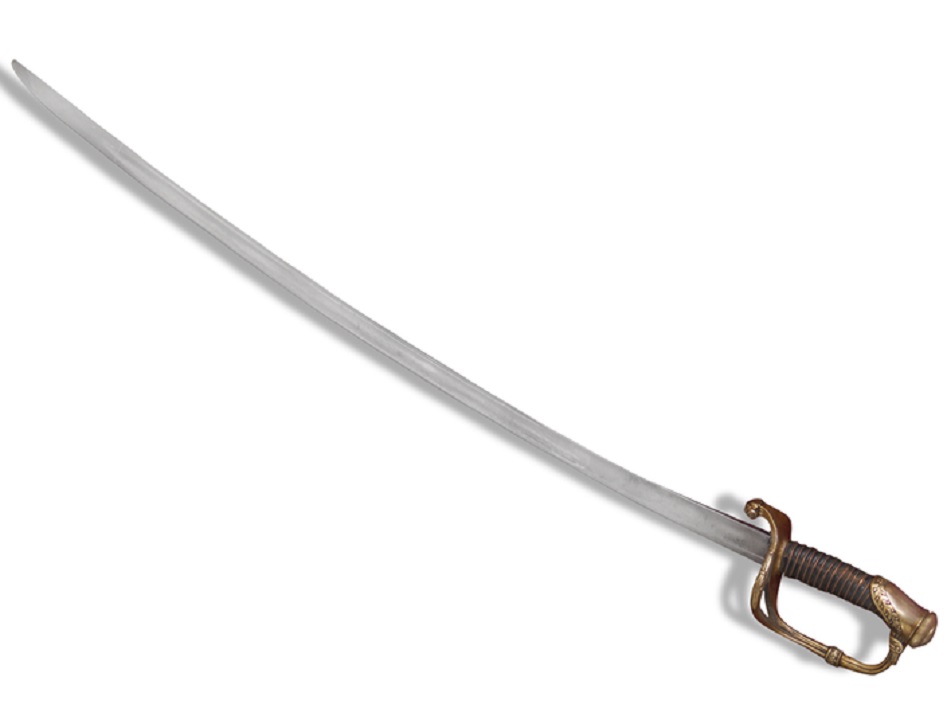 In case of sabre, hit with weapon point or by the side of the weapon, both are valid. Hits outside the target area are not valid. But off-target touch doesn’t stop the action. During simultaneous touching, referee takes the decision using “right of way” rule. The mask is different and it includes a metallic covering as head is a valid target in this fencing.