The first and foremost step to initiate a project is to prepare the project charter. It is one of the most important documents of the project, and it is being used throughout the life of the project. Once it is prepared and approved by the project initiator or the project sponsor, the project actually kicks off. It is the moment when the project manager is formally authorized to start the project by using the organisational resources.

A project charter is prepared by considering the SOW – the project statement of work, which is created by the customer or the sponsor, describing their needs and the scope of the product. The project charter is also created by keeping an eye on the cost benefits analysis reports, and other organisational documented practices and procedures.

How it Assists Project Managers? 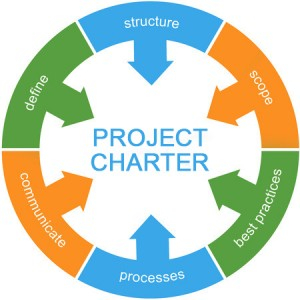 The benefits of project charter are as follows –

So, as we discussed the uses and benefits of the project charter, let’s see how it looks like.

The name of the project is “Flyover in ABC Junction”. We have awarded to construct a flyover from the government agency. The flyover needs to be constructed on the ABC junction to ease the traffic commute. It is a time bound project, the flyover should be constructed in the given time frame as per government mandate and the required material and resources should be used as per prescribed quantities and qualities.

Name of the Project Manager and his level of authority to approve the project budget, resource allocation, Schedule etc…

Mr. X will be the project manager for this project. He can select the team members by coordinating with resource managers to secure the needed resources. He has the authority to approve and use the budget up to $15,000.

Reasons for doing the project, Justify it based on the financial aspects.

we are highly confident that, after completion of the flyover, the company will earn 20% profit revenue from the awarded budget. Also, the company will add one more feather to its name and fame which may lead to winning many such flyover constructions from the government agencies in future.

List all the stakeholders, who will affect or affected by the projects, and if any high-level requirements are known then that should be mentioned here.

Please see the attached list of all the identified stakeholders with their name and other details.

Some of the known requirements are as follows:

Organizations Involved in the Project

Define which other groups or members are going to work in the project and their role.

The DFH Architecture team will assist our internal architecture team to design the layout of the flyover. The Engineering department will work closely with them. The XYZ resource company will supply the required labourer to work on the project.

High-level project schedule should be listed here, which may be changed or modified at the planning stage of the project.

What are the assumptions, for which we do not have any data to proof?

We are assuming that there are plenty of laborers in the local area to be used in the project, which save cost to import them from nearby states.

Mention the factors which may hinder the project deliverable. What are the limitations for the project to function within?

In case of inadequate supply of laborer, it will impact the timely delivery of the project.

Describe the potential threats as well as opportunities for the project.

Mention the name of the sponsor/s of the project to take his/her signature as approval.

There are other sections which can be included in the project charter based on the industries type and size of organizations. Some organizations which work with multiple operations units may include a section in the template which describes the approval authority of different departments, such as:

We will discuss more into it, and also the value of identifying them in the early stages of the project in our next article.