Have you ever met or heard about an aged person who has difficulty recalling things? Someone who keeps forgetting names of people they have recently met, places they have been familiar with for a long time, or even about their relationships? If a condition like this is so severe that it can affect a person's ability to carry on daily tasks and complete dependency on someone else, it is called Alzheimer's Disease- The most common type of dementia. Dementia refers decline in the cognitive functions. As dementia is an umbrella term for the inability to think, remember, make decisions, or do everyday activities, we call dementia a syndrome instead of a disorder. It is very common for people to forget things when they are under much stress or if they are taking medications that cause memory loss. However, when a person is around 65 years of age, it may mean that they are showing the early symptoms of dementia. Dementia is not just about memory loss; it also affects how a person thinks, speaks, feels, and behaves. People with dementia may lose interest in relationships and socializing and make the people around them feel they are becoming cold. They may also have hallucinations and difficulty coping with emotions. Dementia is the seventh leading cause of death among all diseases worldwide.

However, it must be kept in mind that aging is not the only cause of dementia, and dementia can even affect people who are younger than 65 years of age. Studies have shown that 9% of cases of dementia are 'young onset dementia.'

Signs and Symptoms of Dementia

As the causes of dementia may differ from person to person, every case of dementia is unique. Generally, a person who has dementia goes through these stages - Early stage: This stage is often overlooked as the symptoms are very mild and normal. At this stage, people often forget where they have kept the items of their daily use. Other than that, they easily lose track of time and forget about any appointments they have made. They even get lost in a place that's familiar to them, like the way to their house or the way to the grocery store.

Middle Stage: The signs and symptoms are more apparent and alarming at this stage. People start forgetting about their recent activities or the names of people they have always known. They find it difficult to follow a conversation and communicate with people around them. They feel confused even when they're sitting in their homes. They even wander around without knowing where they are going. They even start having behavioral problems. This is the stage when the patient starts requiring personal care.

Late stage: The patients at this stage become dependent on someone's help. The signs and symptoms become very obvious. They are unaware of what time it is and where they are. They may not recognize their family members and closest friends. They would mostly depend on a wheelchair as they have difficulty in walking. In some cases, the patients would even lose their temper easily. At this stage, making the patients understand the caretaker's intentions become difficult.

Dementia occurs as diseases damage neurons in the brain. Neurons receive sensory inputs and send commands to the muscles. Many different causes can damage neurons of different parts of the brain. Hence every case of dementia is unique. The biggest risk factor for dementia is age. However, it should be noted that natural aging does not inevitably cause dementia. Different risk factors of dementia other than age are: 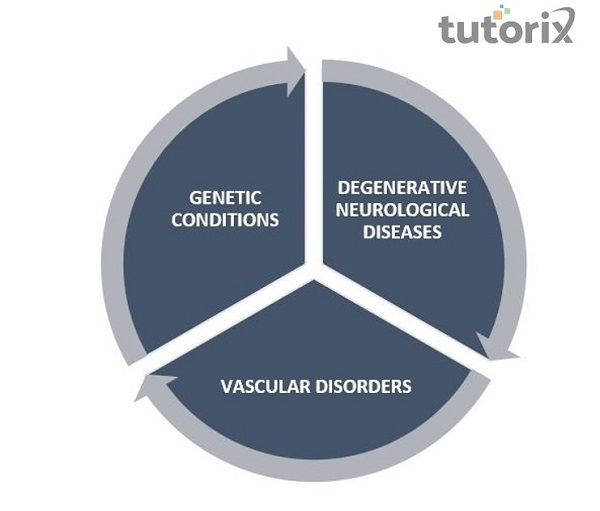 Listed below are the four common types of dementia. These are vascular, Lewy body, and frontotemporal dementia.

This type of dementia is caused by strokes, traumatic brain injuries such as car accidents and falls, diabetes, high blood pressure, and cholesterol levels, or excessive use of drugs and alcohol. These conditions impact the blood circulation in the brain and cause dementia. As the condition gets worse, so do the symptoms.

Alzheimer's is the most common type of dementia. Frequently Dementia and Alzheimer's are used interchangeably. However, it is not true, as Alzheimer's is a specific disease. This condition slowly deteriorates memory and thinking abilities and causes difficulty while carrying out the simplest tasks. There is a 10-30% chance that a person whose first-degree relative has Alzheimer's will be affected by Alzheimer's.

This type of dementia happens when an abnormal amount of a protein called alpha-synuclein is deposited in the brain. Other than the typical dementia symptoms, what sets Lewy Body apart is the deterioration of motor abilities. People with this type of dementia find it difficult to balance, and they either tremble a lot or their bodies get stiff. Some of them even have trouble sleeping and experience visual hallucinations. Auditory, tactile, and olfactory hallucinations are also possible but are less common.

This type of dementia affects the frontal and temporal lobes of the brain. Due to the parts of the brain it damages, this dementia causes behavioral problems in the patients. A person with this condition tends to behave inappropriately or embarrass themselves. This dementia is also known as Pick's disease. 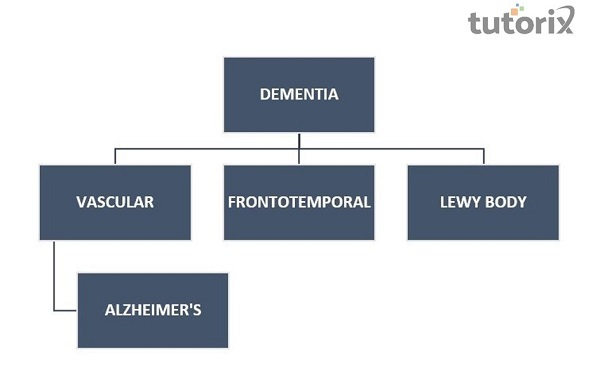 Dementia, a progressive condition with symptoms from mild to worse over time, affects the elderly. It is one of the leading causes of death in the world. As of yet, dementia has no cure. However, getting an early diagnosis and non-drug treatment such as talk therapies and other person-centered care can help a person live well. Furthermore, drugs such as Cholinesterase inhibitors and glutamate regulators can reduce symptoms such as memory and confusion.