Syntax defines a set of rules for writing programs. Every language specification defines its own syntax. A Dart program is composed of −

Let us start with the traditional “Hello World” example −

The main() function is a predefined method in Dart. This method acts as the entry point to the application. A Dart script needs the main() method for execution. print() is a predefined function that prints the specified string or value to the standard output i.e. the terminal.

You can execute a Dart program in two ways −

To execute a Dart program via the terminal −

Via the WebStorm IDE

To execute a Dart program via the WebStorm IDE − 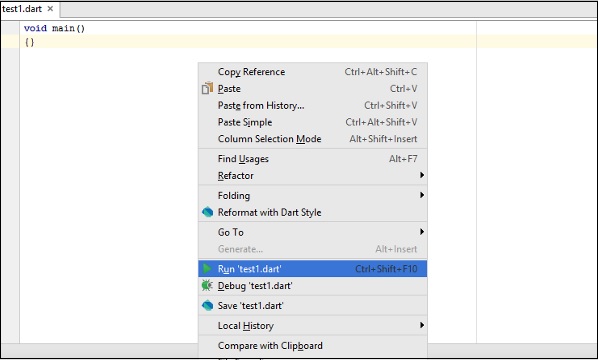 button or use the shortcut Ctrl+Shift+F10 to execute the Dart Script.

However, to ensure performance benefit while running the script, it is recommended to run the script in the production mode.

Run the script by entering −

Though there is a type-mismatch the script executes successfully as the checked mode is turned off. The script will result in the following output −

The Dart VM will throw an error stating that there is a type mismatch.

Identifiers can include both, characters and digits. However, the identifier cannot begin with a digit.

Keywords have a special meaning in the context of a language. The following table lists some keywords in Dart.

Dart is case-sensitive. This means that Dart differentiates between uppercase and lowercase characters.

Statements end with a Semicolon

Each line of instruction is called a statement. Each dart statement must end with a semicolon (;). A single line can contain multiple statements. However, these statements must be separated by a semicolon.

Comments are a way to improve the readability of a program. Comments can be used to include additional information about a program like author of the code, hints about a function/ construct etc. Comments are ignored by the compiler.

Dart is an Object-Oriented language. Object Orientation is a software development paradigm that follows real-world modelling. Object Orientation considers a program as a collection of objects that communicate with each other via mechanism called methods.

The above example defines a class TestClass. The class has a method disp(). The method prints the string “Hello World” on the terminal. The new keyword creates an object of the class. The object invokes the method disp().

The code should produce the following output −