In the previous chapter we treated antiviruses which helped us to protect our systems but in this chapter we will treat malwares, how to detect them manually, what are their forms, what are their file extensions, signs of an infected computer, etc. They are important to be treated because the infection rates of businesses and personal computers are too high in nowadays.

They are self-replication programs that reproduce their own codes by attaching themselves to other executable codes. They operate without the permissions or knowledge of the computer users. Viruses or malwares like in real-life, in computers they contaminate other healthy files.

However, we should remember that viruses infect outside machines only with the assistance of a computer user only. These can happen by clicking a file that comes attached with email from an unknown person, plugging a USB without scanning, opening unsafe URLs for that reason. We as system administrators have to remove the administrator permissions of users in these computers. We categorize malwares in three types −

Characteristics of a Virus

Following are a couple of characteristics of any virus that infects our computers.

After finding this file, I opened it with a text editor and as thought the text was not understandable as shown in the following screenshot.

After finding this, I tried it on a base64 decoder and I found that it was a Virus file. 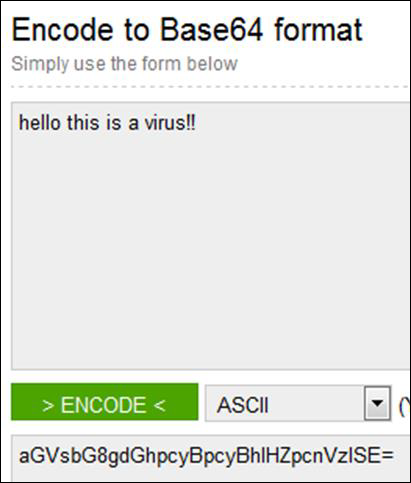 This virus can cause the following to your computer −

Working Process of Malwares and how to Clean it

Malwares attach themselves to programs and transmit to other programs by making use of some events, they need these events to happen because they cannot −

From the above conclusions, we should know that when some unusual processes or services are run by themselves we should further investigate their relations with a possible virus. The investigation process is as follows −

To investigate these processes, start with the use of the following tools −

The Listdll.exe shows all the dll files being used, while the netstat.exe with its variables shows all the processes that are being run with their respective ports.

You can see the following example on how I mapped the process of Kaspersky antivirus which I used along with the command netstat-ano to see the process numbers and task manager to see to which process belongs to this number. 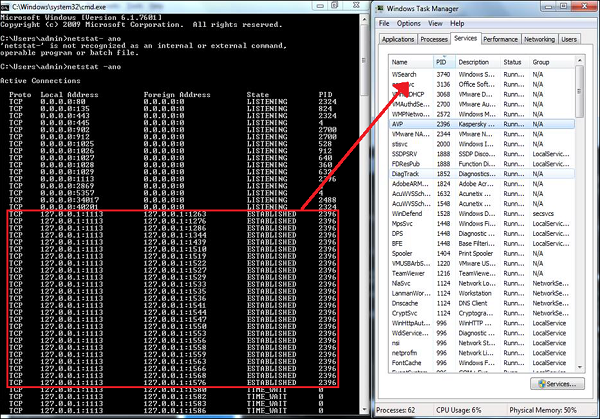 Then we should look for any modified, replaced or deleted files and the shared libraries should also be checked. They generally infect executable program files with extension like .EXE, .DRV, .SYS, .COM, .BIN. Malwares changes extension of genuine files, for example: File.TXT to File.TXT.VBS.

If you are a system administrator of a webserver, then you should be aware of another form of malware which is called as webshell. It generally is in a .php extension but with strange file names and in an encrypted form. You should delete them in case you detect them.

After that is done, we should update the antivirus program and rescan the computer again.

Detecting a Computer Error from a Virus Infection

In this section we will treat how to detect a computer or OS fault from a virus because sometimes people and system administrators mix the symptoms.

The following events are most likely not caused by a malware −

On the other hand, if you have the following signs in your system, you should check for malware.

Some Practical Recommendations to Avoid Viruses −

If you have found a virus but you want to investigate further regarding its function. I would recommend you to have a look at these virus databases, which are offered generally by antivirus vendors.