Voice Recognition is also called Speaker Recognition. At the time of enrollment, the user needs to speak a word or phrase into a microphone. This is necessary to acquire speech sample of a candidate.

The electrical signal from the microphone is converted into digital signal by an Analog to Digital (ADC) converter. It is recorded into the computer memory as a digitized sample. The computer then compares and attempts to match the input voice of candidate with the stored digitized voice sample and identifies the candidate. 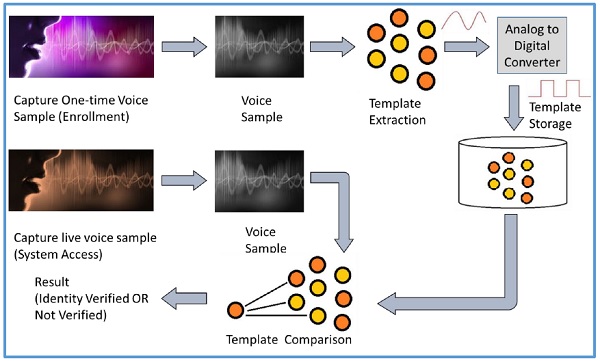 There are two variants of voice recognition − speaker dependent and speaker independent.

Speaker dependent voice recognition relies on the knowledge of candidate's particular voice characteristics. This system learns those characteristics through voice training (or enrollment).

Speaker independent systems are able to recognize the speech from different users by restricting the contexts of the speech such as words and phrases. These systems are used for automated telephone interfaces.

Difference between Voice and Speech Recognition

Speaker recognition and Speech recognition are mistakenly taken as same; but they are different technologies. Let us see, how −