Images have a huge share in this era of information. In biometrics, image processing is required for identifying an individual whose biometric image is stored in the database previously. Faces, fingerprints, irises, etc., are image-based biometrics, which require image processing and pattern recognition techniques.

For an image based biometric system to work accurately, it needs to have the sample image of user’s biometric in a very clear and non-adulterated form.

Requirement of Image Processing in Biometrics

The image of user’s biometric is fed into the biometric system. The system is programmed to manipulate the image using equations, and then store the results of the computation for each pixel.

To selectively enhance certain fine features in the data and to remove certain noise, the digital data is subjected to various image processing operations.

Image processing methods can be grouped into three functional categories −

Image smoothing reduces noise in the image. Smoothing is carried out by replacing each pixel by the average value with the neighboring pixel. The biometric system uses various filtering algorithms and noise reduction techniques such as Median Filtering, Adaptive Filtering, Statistical Histogram, Wavelet Transforms, etc.

Image enhancement techniques improve the visibility of any portion or feature of the image and suppress the information in other parts. It is done only after restoration is completed. It includes brightening, sharpening, adjusting contrast, etc., so that the image is usable for further processing.

Two types of features are extracted from image, namely − 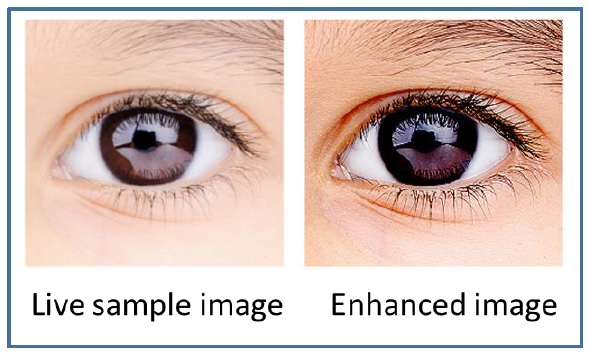