Behavioral biometrics pertains to the behavior exhibited by people or the manner in which people perform tasks such as walking, signing, and typing on the keyboard.

Behavioral biometrics modalities have higher variations as they primarily depend on the external factors such as fatigue, mood, etc. This causes higher FAR and FRR as compared to solutions based on a physiological biometrics.

Gait is the manner of a person’s walking. People show different traits while walking such as body posture, distance between two feet while walking, swaying, etc., which help to recognize them uniquely.

A respective mathematical model is created for every candidate person and stored in the database. At the time of verification, this model is compared with the live sample of the candidate walk to determine its identity. 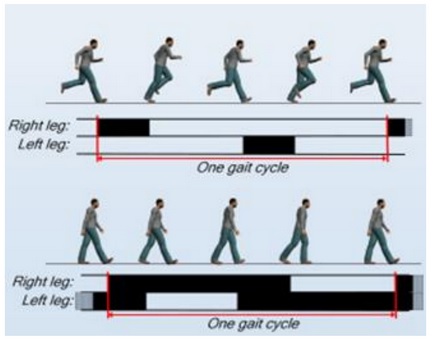 It is well-suited for identifying criminals in the crime scenario.

In this case, more emphasis is given on the behavioral patterns in which the signature is signed than the way a signature looks in terms of graphics.

The behavioral patterns include the changes in the timing of writing, pauses, pressure, direction of strokes, and speed during the course of signing. It could be easy to duplicate the graphical appearance of the signature but it is not easy to imitate the signature with the same behavior the person shows while signing.

This technology consists of a pen and a specialized writing tablet, both connected to a computer for template comparison and verification. A high quality tablet can capture the behavioral traits such as speed, pressure, and timing while signing.

During enrollment phase, the candidate must sign on the writing tablet multiple times for data acquisition. The signature recognition algorithms then extracts the unique features such as timing, pressure, speed, direction of strokes, important points on the path of signature, and the size of signature. The algorithm assigns different values of weights to those points.

At the time of identification, the candidate enters the live sample of the signature, which is compared with the signatures in the database.

During the World War II, a technique known as Fist of the Sender was used by military intelligence to determine if the Morse code was sent by enemy or ally based on the rhythm of typing. These days, keystroke dynamics the easiest biometric solution to implement in terms of hardware.

This biometric analyzes candidate’s typing pattern, the rhythm, and the speed of typing on a keyboard. The dwell time and flight time measurements are used in keystroke recognition.

Dwell time − It is the duration of time for which a key is pressed.

Flight time − It is the time elapsed between releasing a key and pressing the following key.

The candidates differ in the way they type on the keyboard as the time they take to find the right key, the flight time, and the dwelling time. Their speed and rhythm of typing also varies according to their level of comfort with the keyboard. Keystroke recognition system monitors the keyboard inputs thousands of times per second in a single attempt to identify users based on their habits of typing.

There are two types of keystroke recognition −