A team consists of 18 players, whereas three substitute players are allowed on the bench. Free substitution is allowed at any time during a match through a designated interchange gate in front of either bench. In the arena, players are deployed in five lines, each line consisting of three players and based on their position, they are designated as left, right or center relative to the direction of attack.

The players based on their positions are as follows − 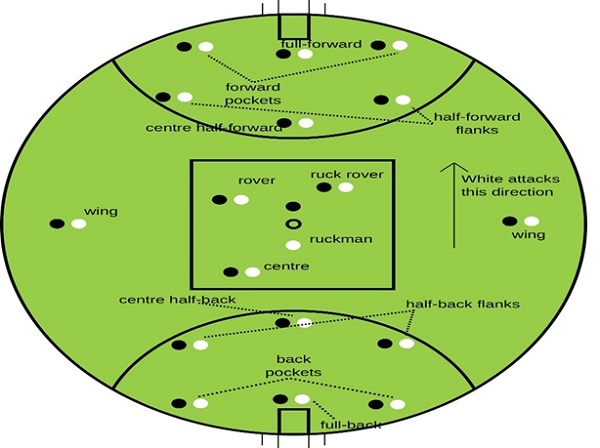 The players, who follow the ball, are known as followers. They are named as Ruckman, Rover, and Ruck-rover. Although players are designated based on their positions, they can move anywhere when the match is in progress. Unlike football, there is no goal keeper in Australian Football.

The Ruckman’s job is to contest for the ball with a fellow Ruckman opposing him at center- bounces at the beginning of a match. Usually players with good heights are chosen as Ruckman. The Ruck rover’s job is to handle the ball once it is tapped down by the Ruckman allowing an easy clearance. The Rover’s job is to lurk around center-bounces and receive the ball from the Ruck rover and complete a clearance.

Player Positions and their Purpose

In front of the interchange gate, there is an interchange area through which all players must enter and exit the ground. A player who interchanges outside this line is not permitted to return for the rest of the match. If a player leaves on stretcher from the ground, he can return back later to the match, but he has to wait for at least 20 minutes before getting back to the match.

If a player is believed to be suffering concussion, he must come off the ground and appear or concussion test, failing which he won’t be allowed to return to the match. If a player is seen bleeding by umpire, he may be forced to leave the field immediately according to Blood Rule.

There are three central or field umpires, who have full control over the match. Major roles of the umpires are to start the match, award marks and free kicks to teams and enforcing the rules of the sport. The two boundary umpires judge when the ball is out of the boundary area. They also return the ball to the center once a goal is scored. The boundary umpires are responsible for detecting players who have entered the centre square illegally.