Address Resolution Protocol (ARP) is a communication protocol that works on the TCP/IP Layer 2.

How Does ARP Work? 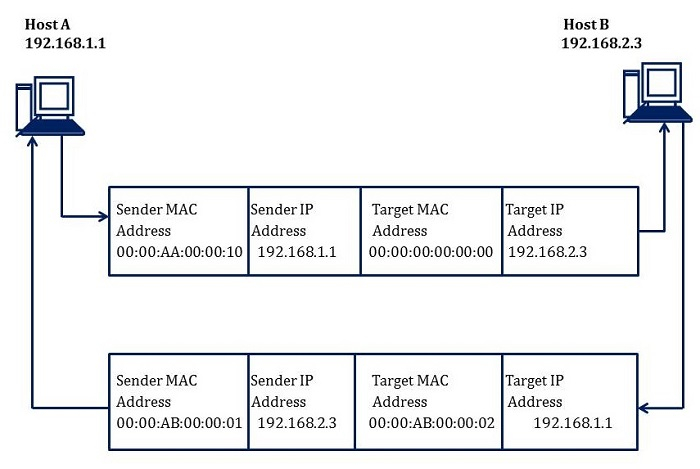 Format of an ARP Packet

The following diagram shows the format of an ARP packet.

RARP protocol is used by a device that knows its MAC address but does not know its IP address in a local area network (LAN).

The problem of getting an IP address from a MAC address can be handled by the reserved address resolution protocol (RARP) which works similar to ARP.

Inverse ARP is mostly used by Frame relay and ATM Networks to map the DLCI to IP Address. So the router asks for the IP Address of the destination or other ends of PVC by listing DLCI for that router.

Proxy ARP is a technique using which a proxy server on a given network answers the ARP queries for an IP address that is not on that network.

A gratuitous ARP is an unprompted address resolution protocol response.

When a new device joins the local area network (LAN), it broadcasts its MAC address to the whole network immediately after its network interfaces boot up.

Gratuitous ARP packet has both source and destination IP set to the IP address of the device issuing the packet, and the destination MAC is the broadcast address ff:ff:ff:ff:ff:ff or 00:00:00:00:00:00 based on the address resolution protocol (ARP) implementation.

No continuation packets are sent in response to a gratuitous ARP packet.