Testing is the integrated part of Apex or any other application development. In Apex, we have separate test classes to develop for all the unit testing.

In SFDC, the code must have 75% code coverage in order to be deployed to Production. This code coverage is performed by the test classes. Test classes are the code snippets which test the functionality of other Apex class.

Let us write a test class for one of our codes which we have written previously. We will write test class to cover our Trigger and Helper class code. Below is the trigger and helper class which needs to be covered.

In this section, we will understand how to create a Test Class.

By using this annotation, you declared that this is a test class and it will not be counted against the organization's total code limit.

Unit test methods are the methods which do not take arguments, commit no data to the database, send no emails, and are declared with the testMethod keyword or the isTest annotation in the method definition. Also, test methods must be defined in test classes, that is, classes annotated with isTest.

We have used the 'myUnitTest' test method in our examples.

These are the standard test methods which are available for test classes. These methods contain the event or action for which we will be simulating our test. Like in this example, we will test our trigger and helper class to simulate the fire trigger by updating the records as we have done to start and stop block. This also provides separate governor limit to the code which is in start and stop block.

This method checks the desired output with the actual. In this case, we are expecting an Invoice record to be inserted so we added assert to check the same.

Follow the steps given below to run the test class − 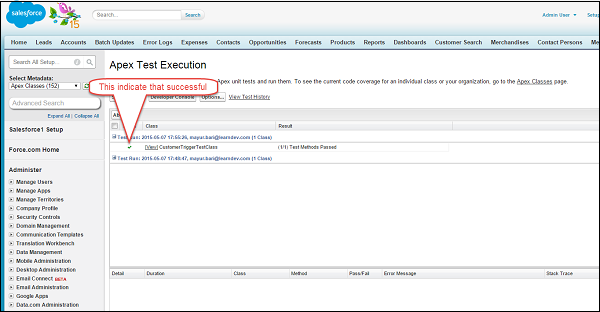 Our testing is successful and completed.