Apex is a proprietary language developed by the Salesforce.com. As per the official definition, Apex is a strongly typed, object-oriented programming language that allows developers to execute the flow and transaction control statements on the Force.com platform server in conjunction with calls to the Force.com API.

It has a Java-like syntax and acts like database stored procedures. It enables the developers to add business logic to most system events, including button clicks, related record updates, and Visualforce pages.Apex code can be initiated by Web service requests and from triggers on objects. Apex is included in Performance Edition, Unlimited Edition, Enterprise Edition, and Developer Edition. 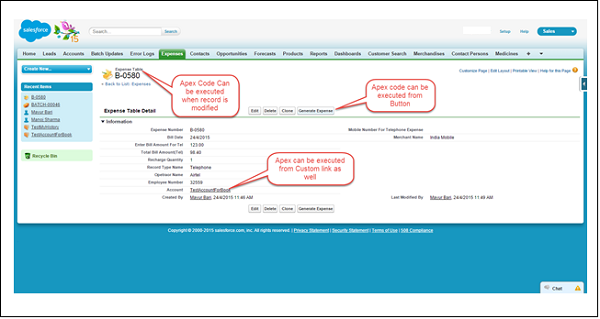 Features of Apex as a Language

Let us now discuss the features of Apex as a Language −

Apex has built in support for DML operations like INSERT, UPDATE, DELETE and also DML Exception handling. It has support for inline SOQL and SOSL query handling which returns the set of sObject records. We will study the sObject, SOQL, SOSL in detail in future chapters.

Apex is easy to use as it uses the syntax like Java. For example, variable declaration, loop syntax and conditional statements.

Apex is data focused and designed to execute multiple queries and DML statements together. It issues multiple transaction statements on Database.

Apex is a strongly typed language. It uses direct reference to schema objects like sObject and any invalid reference quickly fails if it is deleted or if is of wrong data type.

Apex runs in a multitenant environment. Consequently, the Apex runtime engine is designed to guard closely against runaway code, preventing it from monopolizing shared resources. Any code that violates limits fails with easy-to-understand error messages.

Apex is upgraded as part of Salesforce releases. We don't have to upgrade it manually.

Apex provides built-in support for unit test creation and execution, including test results that indicate how much code is covered, and which parts of your code can be more efficient.

When Should Developer Choose Apex?

Apex should be used when we are not able to implement the complex business functionality using the pre-built and existing out of the box functionalities. Below are the cases where we need to use apex over Salesforce configuration.

We can use Apex when we want to −

When a developer writes and saves Apex code to the platform, the platform application server first compiles the code into a set of instructions that can be understood by the Apex runtime interpreter, and then saves those instructions as metadata.

When an end-user triggers the execution of Apex, by clicking a button or accessing a Visualforce page, the platform application server retrieves the compiled instructions from the metadata and sends them through the runtime interpreter before returning the result. The end-user observes no differences in execution time as compared to the standard application platform request.

Apex code typically contains many things that we might be familiar with from other programming languages.

As strongly typed language, you must declare every variable with data type in Apex. As seen in the code below (screenshot below), lstAcc is declared with data type as List of Accounts.

This will be used to fetch the data from Salesforce database. The query shown in screenshot below is fetching data from Account object.

The If statement is used for flow control in this code. Based on certain condition, it is decided whether to go for execution or to stop the execution of the particular piece of code. For example, in the code shown below, it is checking whether the list is empty or it contains records.

Performs the records insert, update, upsert, delete operation on the records in database. For example, the code given below helps in updating Accounts with new field value.

Following is an example of how an Apex code snippet will look like. We are going to study all these Apex programming concepts further in this tutorial.