The network model is the extension of the hierarchical structure because it allows many-to-many relationships to be managed in a tree-like structure that allows multiple parents.

There are two fundamental concepts of a network model −

P.S. Set must not be confused with the mathematical set.

A set is designed with the help of circular linked lists where one record type, the owner of the set also called as a parent, appears once in each circle, and a second record type, also known as the subordinate or child, may appear multiple times in each circle.

A hierarchy is established between any two record types where one type (A) is the owner of another type (B). At the same time, another set can be developed where the latter set (B) is the owner of the former set (A). In this model, ownership is defined by the direction, thus all the sets comprise a general directed graph. Access to records is developed by the indexing structure of circular linked lists.

The network model has the following major features − 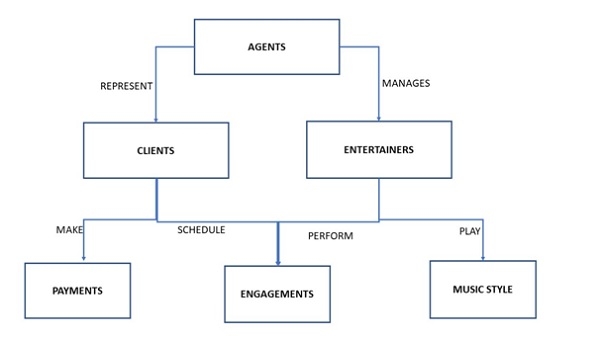 A collection of records is represented by a node, and a set structure helps to establish a relationship in a network helps to This development helps to relate a pair of nodes together by using one node as an owner and the other node as a member. A one-to-many relationship is managed by set structure, which means that a record in the owner node can be related to one or more records in the member node, but a single record in the member node is related to only one record in the owner node.

Additionally, a record in the member node cannot exist without being related to an existing record in the owner node. For example, a client must be assigned to an agent, but an agent with no clients can still be listed in the database.

The above diagram shows a diagram of a basic set structure. One or more sets (connections) can be defined between a specific pair of nodes, and a single node can also be involved in other sets with other nodes in the database.