In this chapter, we will discuss some trend-setting and successful leading women leaders of current times. 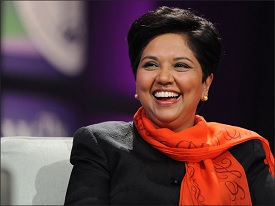 Indra Nooyi is currently serving as the Chairperson and CEO of PepsiCo, which is one of the world’s largest food and beverage companies based in the US. Indian by birth, Nooyi is one of the most successful top female executives in the United States and is consistently ranked among the world’s 100 Most Powerful Women. She is widely acknowledged as the chief architect of PepsiCo’s unprecedented growth and reach.

Nooyi has taken PepsiCo’s fortunes to a new height and made it into a food and drink empire. She reshaped its brand identity and bought many established brands including Tropicana in 1998 and Quaker Oats in 2001 to merge with it. The latter was one of the biggest food deals in corporate history and added a huge range of cereals and snack-food products to the PepsiCo empire.

Arundhati Bhattacharya is the living replica of women leadership in India today. She is the first woman Chairperson of State Bank of India, the largest commercial bank in the country, and is one of few powerful women who have made it to the top of Indian banks. For her exceptional leadership qualities, she was listed as the 25th most powerful woman in the world by Forbes Asian Women Power List in 2016. 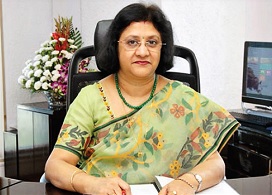 According to the Times of India, Bhattacharya is the first woman to ever lead a Fortune 500 company in India, and the only woman banker on that list of giants anywhere in the world. She was also ranked among the FTP Top 100 Global Thinkers by Foreign Policy magazine. India Today ranked her as the 19th in India’s 50 Most Powerful People List of 2017.

When Bhattacharya took the rein of the banking behemoth (SBI) in India in October 2013, SBI was overburdened with huge non-performing assets (NPAs) which stood at Rs 65,000 cr. As a leader, she took well-planned measures to deal with bad loans, and bring improvement in several areas such as risk management and customer delivery channel. She adopted a six-pronged strategy to deal with the scenario, and the strategy was popular as ‘Super Six’ among the State Bank employees. The six-pronged strategy includes - Improving Asset Excellence, cost normalization, managing the risk, digitalization, fast approach to customers, and relocating Human Resources.

Theresa May is the woman who was the ultimate choice of the Conservative Party in the UK to the office of the Prime Minister in a politically-charged Britain and a time of national uncertainty after the historic Brexit in June 2016. She is the second female Prime Minister of the UK, after Margaret Thatcher. She is also the first to lead the country out of the European Union after its historic Brexit referendum. 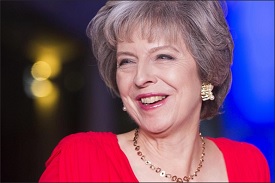 May took charge during one of the most turbulent times in the recent political history. By her ascension to the highest office in the UK, a G8 Member country, has established the fact that women leadership is as powerful and trendsetting as male leadership. She has set an example to follow for women in the world today.

Even before becoming the Prime Minister of the UK, she made history by becoming the second longest serving home secretary in the past 100 years. She is known for her work on police reform and pursuing stricter drug and immigration policies.

One of Westminster's shrewdest as well as toughest operators, May's decision to campaign for the UK to remain in the EU, but to do so in an understated way and to frame her argument in relatively narrow security terms reaped dividends after the divisive campaign.

As a leader, she displays judgment and reliability in a time of crisis. Although she has a tough task ahead, she is all set to play her part as the Prime Minister in a country still driven by divisions over the EU Referendum and anxiety over the future.

No other woman in American History has ever caught the public attention and faced more scrutiny and coverage than Hilary Clinton. She is the most glaring woman face of the USA in the current time. She has been the First Lady of Arkansas, First Lady of the United States of America (USA), U.S. Senator from New York, U.S. Secretary of State, candidate for Democratic Party presidential nomination in 2008 and presidential candidate from Democratic Party for 2016 Presidential Election. 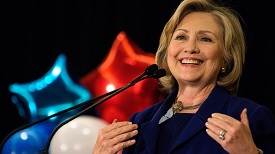 As the First Lady of the USA, she played her part with commitment and innovation. She championed various ambitious efforts to bring improvement in different sector, especially health and education.

Clinton is a widely travelled person. During her travels, she takes her message on human rights, healthcare, and economic empowerment of women across the globe. She has also been a leading voice for democracy building, for women’s rights, etc.

Oprah Winfrey is a popular name in the western entertainment world today. She is a talk show host, actress, producer, and philanthropist at a stretch. Her talk show on television has received wide recognition and popularity. Hers is a rise from rags to riches. She was able to overcome terrible experiences in the past to reach the pinnacle of success in her career. 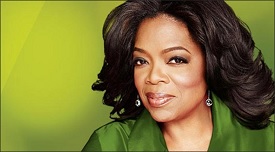 Her production house, Harpo, Inc. came up in August 1986. She launched the Oprah Winfrey Show in 1986. This show earned her huge income. Now syndicated, the show is seen on nearly 212 U.S. stations and in more than 100 countries worldwide. She has produced many popular TV serials with Harpo Inc.

The media giant, as Winfrey is often called, contributed immensely to the publishing world by launching ‘Oprah’s Book Club’ as a part of her talk show. She co-founded a company called Oxygen Media (cable television) in 1999. The Company is dedicated to producing cable and Internet programming for women. With this venture, Winfrey carved out a place in the forefront of the media industry.

Out of her hectic life, Oprah is deeply involved in humanitarian activities. She undertakes a great number of charitable activities and collects funds for such through her organization. She also dedicates herself toward promoting education.

Chanda Kochhar is the current boss of the country’s largest private-sector lender, the ICICI (Industrial Credit and Investment Corporation of India) Ltd. She has often been featured in Fortune magazine's annual lists of the most powerful business women across the world. She was also ranked in the list of Forbes’ 100 most powerful women in the world in 2014. 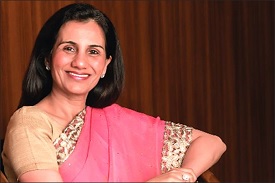 Kochhar has been instrumental in setting up and scaling up the retail business for ICICI Bank. She oversees about USD 125 billion in assets as Managing Director and Chief Executive Officer of ICICI (Industrial Credit and Investment Corporation of India) Bank.

Kochhar is also associated with national and international financial and business forums. She is the President of the International Monetary Conference, an organization that annually brings together the chief executives of approximately 70 of the world’s largest financial institutions from 30 countries, along with officials from government institutions. For her constructive contributions in the banking sector, she was conferred with Padma Bhusan, one of India’s highest civilian awards, in 2011.

Kiran Mazumdar Shaw is globally recognized for her pioneering role in raising a world-class biotechnology industry in India. She is the founder of India’s leading biotechnology enterprise, Biocon. She is termed as an iconic Indian business woman and ‘Czarina of Indian biotech’ for her enviable leadership, which has transformed Biocon from a humble start-up into a billiondollar business. 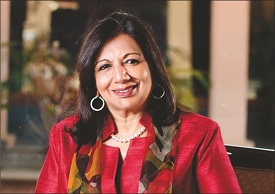 She founded Biocon in India with an initial capital of Rupees 10,000 in 1978. She was only 25 then. Having been driven by unparalleled spirit to create a business that would leverage science for the benefit of society through affordable innovation, she concentrated on introducing affordable biopharmaceuticals for patients who needed them the most.

She received the Chevalier de l'Ordre National de la Légiond'Honneur, France's highest civilian honor, for her outstanding contribution to bioscience in 2016. This self-made billionaire serves as member of the Governing body of the Indian Pharmacopoeial Commission and as a member of the Board of Trustees of the US Pharmacopeial Convention.

Apart from being a highly successful entrepreneur of global repute, she is a philanthropist to the core of her heart. The Mazumdar Shaw Cancer Center in Bangalore provides affordable world-class cancer care services to patients from all sections of society. Her philanthropic efforts have led her to be featured in the Forbes’ List of ‘Heroes of Philanthropy’.