It is established that women leadership has distinct benefits and women leaders are endowed with certain natural qualities such as collaboration, empathy, and considerateness which have become essential ingredients in present leadership trend. However, the subtle gender bias that still persists in the society, community, families, and organizations stand as a strong barrier to women leadership.

Efforts have been made by governments, corporate houses, and social organizations to enable women to give meaning and recognition to their innate leadership qualities and establish themselves as active leaders in the society. It will help build a progressive and developed human society.

However, several barriers still persist that hinder the growth of women into independent leaders. Let us discuss some significant barriers to women leadership in the present time.

The proverbial "glass ceiling" refers to the existence of intangible and unacknowledged impediments that obstruct the advancement of women and the weaker section of the society in professional or public life.

A host of community-specific practices and views constitute the glass ceiling. Here are some of its characteristics −

Glass ceiling as a barrier prevents woman from moving up the hierarchies in organizations, governance and other areas. From a vantage point on their career ladder, women can see the top-level positions but are kept from ‘reaching the top’.

Glass ceilings as barrier are not based upon a person’s inability or lack of expertise and knowledge to carry out assigned tasks. Rather, it relates to women as a community who are knowingly or unknowingly kept from advancing higher because ‘they are women’.

A number of researches indicate that women and men managers don’t differ largely in the competencies they possess. However, stereotypical view of gender role considers women less competent than women. As a result, there exists a gender gap in the assessment of male and female employees. There are instances of less pay for women than that of the men for the same work and equal work hour.

Cultural biases and social arrangement overrate men and underrate women. In order to ascertain the criteria for common competencies for leadership positions, we need to value both the transformational leadership of women and transactional leadership of men. Studies have found that young women are less achieving than young men in technical subjects and areas. Subtle gender bias that persists in organizations and in the society upsets the learning cycle for acquiring new skills and expertise for women after becoming leaders.

Traditional leadership education is not sufficient to help women become successful after assuming leadership positions. Even women rate other women as incompetent. Women are studied to have lower self-confidence, dominance and need for achievement. These findings, though not fully established, create a common assumption that women are less competent than men.

However, recent studies conducted by management institutions and corporate houses reveal that the gender of the leader is less important than the role and responsibilities of the leader’s position. There appears to be little difference between women and men leaders in their core competencies such as leading and motivating, mentoring and coaching, managing finances, building teamwork, communicating to employees, conducting appraisals, managing resources, etc.

Here, we have highlighted a few major reasons behind the existence of gender disparity −

In many societies, especially in Asia, gender discrimination has been accepted as a tradition. Men are given priority in almost every aspect social and cultural life. Women and girls are assigned negligible roles to play in decision-making process affecting family and society.

Women have achieved almost parity with men in the number of both employees in the workforce and positions in the middle management level. Women now comprise 57 percent of the total US job market and 52 percent of all management roles and professional occupations, such as physicians and attorneys.

However, the higher one climbs, the wider the gender gap one finds. Women make up only 15 percent board seats, 14 percent of executive officers and paltry 2 percent of CEOs. About 98 percent of Fortune 500 CEO positions are held by men.

Women are usually not given preference by political parties while choosing candidates for contesting elections. Women are seen as incompetent to fight elections and get elected to legislatures. Women representation in legislatures, judiciary, government and business is not very encouraging even in developed countries despite umpteen measures and a number of institutional interference in the issues of empowering women in the world.

Maintaining work-life balance is also a great barrier to women leadership. Women are still attending the bulk of domestic and child care responsibilities at home, even when both spouse are full-time employees. Women in this situation find themselves in dilemma as to how to maintain a perfect balance between home and workplace demands. Maintaining work-life balance is one of the most complex barriers to women leadership.

Women professionals find it quite stressful while trying to balance motherhood and working outside home. The changing nature of work environment especially at the top of the hierarchy that demand round-the-clock work schedule represent an impasse to many women who wish to extend life outside the workplace. 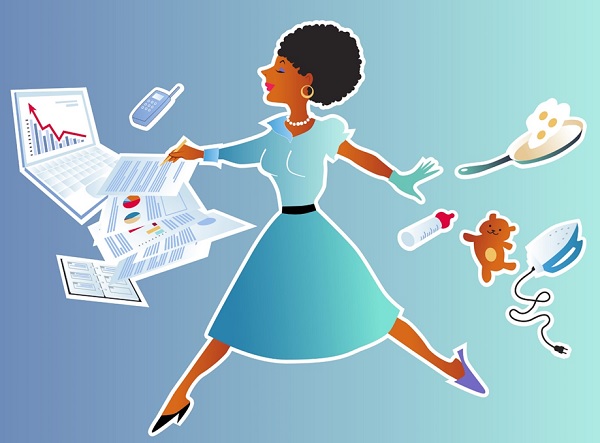 Further, when the women professional climb the ladder of their rising career and as their family grows, their responsibilities multiply. Time spent in the office continues to be seen as a powerful indicator of work commitment that impacts on family life, health, and productivity of men and women at work.

Most employers and businesses have put in place flexible work initiatives so as to attract talented women to the jobs. However, choosing flexibility suggests a lesser engagement with the workforce. Flexibility options are not meeting the needs of senior female talents. Yet, many successful women leaders have both a good family and an enviable career graph. They have not sacrificed either.