What is traffic aware routing in computer networks?

Traffic awareness is one of the approaches for congestion control over the network. The basic way to avoid congestion is to build a network that is well matched to the traffic that it carries. If more traffic is directed but a low-bandwidth link is available, congestion occurs.

The main goal of traffic aware routing is to identify the best routes by considering the load, set the link weight to be a function of fixed link bandwidth and propagation delay and the variable measured load or average queuing delay.

Least-weight paths will then favour paths that are more lightly loaded, remaining all are equal.

The traffic aware routing is diagrammatically represented as follows − 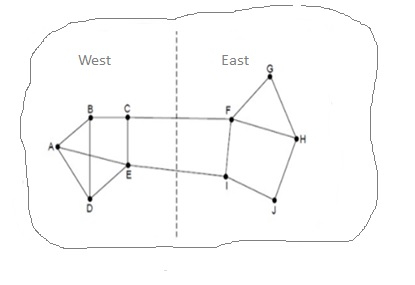 Step 1 − Consider a network which is divided into two parts, East and West both are connected by links CF and EI.

Step 2 − Suppose most of the traffic in between East and West is using link CF, and as a result CF link is heavily loaded with long delays. Including queueing delay in the weight which is used for shortest path calculation will make EI more attractive.

Step 3 − After installing the new routing tables, most of East-West traffic will now go over the EI link. As a result in the next update CF link will appear to be the shortest path.

Step 4 − As a result the routing tables may oscillate widely, leading to erratic routing and many potential problems.

Step 5 − If we consider only bandwidth and propagation delay by ignoring the load, this problem does not occur. Attempts to include load but change the weights within routing scheme to shift traffic across routes arrow range only to slow down routing oscillations.

Step 6 − Two techniques can contribute for successful solution, which are as follows −

The features of traffic aware routing are as follows −