What is Myrinet Clos Network?

Myrinet switches have 4, 8, 12, 16 ports. For an n-port switch, the ports are addressed 0, 1, 2... n - 1. For any switching permutation, there may be as many packets traversing a switch concurrently as the switch has ports. These switches are implemented using two types of VLSI chips such as crossbar-switch chips and the Myrinet-interface chip.

The basic building block of the Myrinet-2000 network is a 16-port Myrinet crossbar switch, implemented on a single chip designated as Xbar16. It can be interconnected to build various topologies of varying sizes. The most common topology is the Clos network. 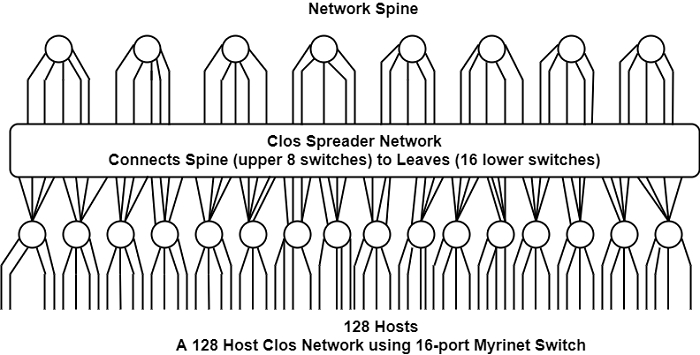 The routing of Myrinet packets is based on the source routing approach. Each Myrinet packet has a variable-length header with complete routing information. When a packet enters a switch, the leading byte of the header determines the outgoing port before being stripped off the packet header. At the host interface, a control program is executed to perform source-route translation.