A multistation access unit (MSAU), also called a media access unit (MAU), is a central device that acts as Ethernet transceivers in local area networks. It is used to connect network stations or nodes in LANs and operates according to the principle of token ring. The multiple stations are connected in a star topology physically but are internally wired into a logical ring.

The following figure shows a MSAU having 8 ports shown in black squares and numbered from 1 to 8, each of which can be connected to a device. Additionally, it has two ports ring-out (RO) and ring-in (RI) for connecting to other MSAUs. The physical connection between the computers is shown by bold blue lines while the logical ring is shown using dashed lines. 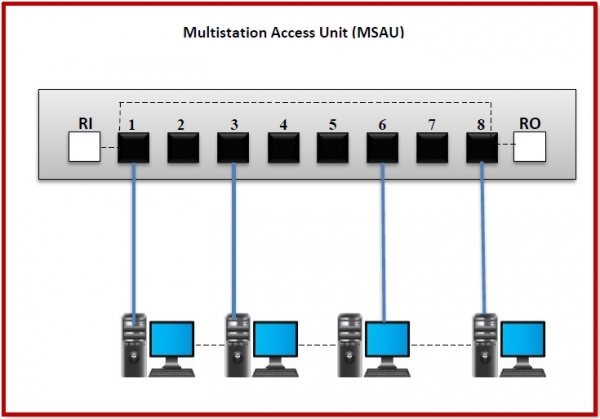 The logical configuration forms a ring topology where each message passes through every device one by one. Each device passes the message on to the next station in a continuous circle. However, an advantage of MSAU over conventional ring topology is that if one device in the ring fails, the MSAU can bypass it and forward the message to the next device in the ring, thus keeping the connection intact.

The ring-in ring-out ports allow multiple MSAUs to be connected in a ring, thus extending the size of the LAN in multiples of 8. For example, if we have four MSAUs, the total number of computers that can be connected will be 4 × 8 = 32. The MSAUs are connected so that RI of one MSAU is connected to the RO of the next MSAU.

This is shown in the following diagram − 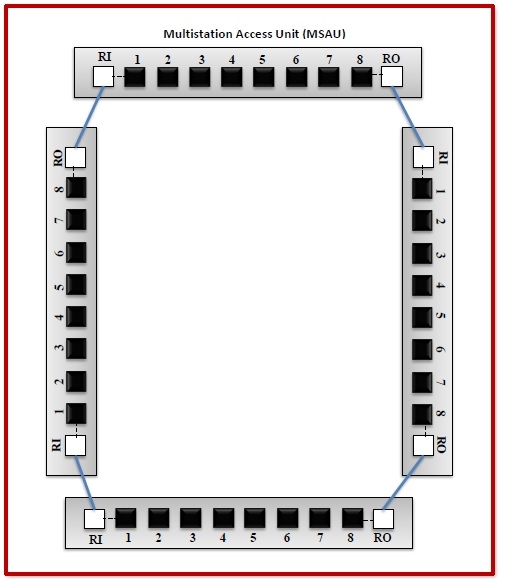