What is IPV4 address notation and hierarchy of addressing?

If a device has two connections to the Internet, via two networks, then we call it has two IPv4 addresses.

IPv4 addresses are universal in a sense where the addressing system must be accepted by any host that wants to be connected to the Internet.

Here, IPv4 address is displayed as 32 bits. To make the address more readable, one or more spaces are inserted between bytes (8 bits).

Here, IPv4 addresses are written in decimal form with a decimal point separating the bytes. Each number in the dotted-decimal notation is between 0 and 255.

The different types of communication network that involve delivery, the addressing system is hierarchical.

A prefix can be fixed length (or) variable length. 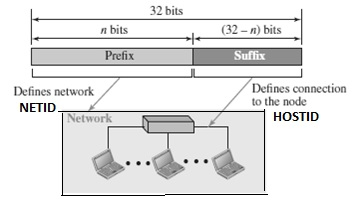 The network identifier in the IPv4 was first designed as a fixed-length prefix. This scheme is referred to as classful addressing.

The new scheme, which is referred to as classless addressing, uses a variable length network prefix.

There are two broad categories of IPv4 Addressing techniques. They are as follows −