What is a Virtual Circuit Identifier (VCID)?

Virtual Circuit Identifier (VCID or VCI) is an identifier or label on any virtual circuit in a computer network that indicates where a data unit has to travel over the network.

A virtual circuit (VC) is a technique by which data is transmitted over a packet switched network such that it seems as though there is a dedicated physical link between the source and destination systems.

VCID allows the same channel to be used for simultaneous connections. The same VCID may be reused by connections having disjoint paths, allowing the network to support concurrent connections.

Establishment of VC and use of VCID

The following diagram illustrates the technique of link allocation. Here, two virtual circuits with VCID = 1 and VCID = 2 are set up. There are links going into a switch and out of a switch. Links may be shared by more than one VCs. Here, link 10 is shared by both VCID 1 and VCID 2. Each switch gives a mapping of VCID : link_number. Thus, the VC is set up and delivery of data occurs from the source to the destination. 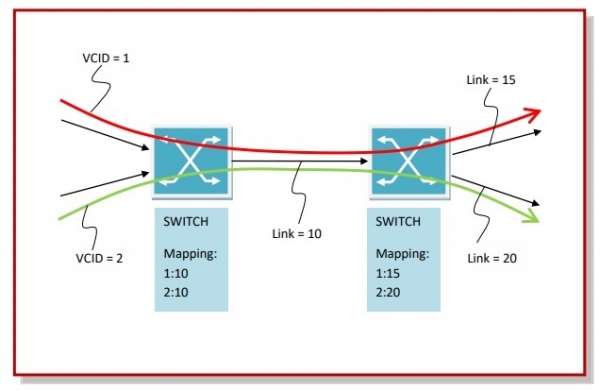 Asynchronous Transfer Mode (ATM) is a switching technique that uses time division multiplexing (TDM) for data communications. It is a network technology that supports voice, video and data communications. ATM encodes data into small fixed - sized cells and transmits them over physical medium. Each ATM cell contains a VCID in its header. The devices uses it to forward the ATM cells along the paths.