What are the Different Phases of a Compiler? 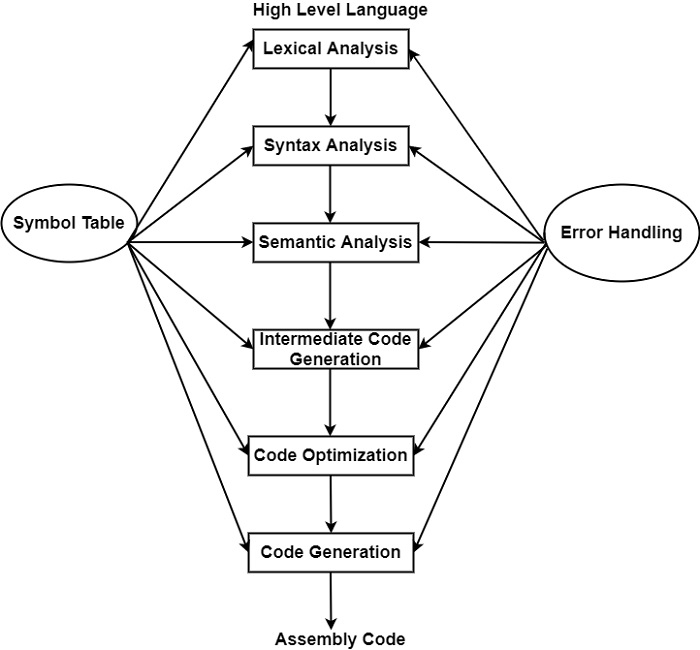 It is also known as a scanner. This is the first step that works as an integration between the compiler and the source language code. It reads the source code one character at a time and designs a source code into a series of atomic units known as tokens.

Each token defines a sequence of characters that can be considered as a single logical entity. It may be an identifier, keyword, constant, operators, and punctuation symbol such as , and ;.

The character sequence constructing a token is known as the lexeme of the token. It also removes comments and unnecessary spaces.

It is also known as the parser. It receives tokens as its input generated from the previous phase (lexical analysis) and produces a hierarchical structure called syntax tree or parse tree.

There are two types of Parsers −

This phase takes the syntactically and semantically correct form as input and produces the same intermediate notation of the source code.

It is an optional phase. It converts the intermediate representation of the source program into an efficient code.

This is the final step of the compilation process. It converts optimized intermediate code into Machine/Assembly code. It allocates memory locations for variables in the program.

Better code generation can be only performed by efficient utilization of registers.

The main task of the compiler is to perform error detection and reporting. This error handler is invoked when an error in the source code is found. Each phase encounters an error after discovering an error a phase should somehow manage with that error so that compilation can continue.