We have learnt how a parser constructs parse trees in the syntax analysis phase. The plain parse-tree constructed in that phase is generally of no use for a compiler, as it does not carry any information of how to evaluate the tree. The productions of context-free grammar, which makes the rules of the language, do not accommodate how to interpret them.

The above CFG production has no semantic rule associated with it, and it cannot help in making any sense of the production.

Semantics of a language provide meaning to its constructs, like tokens and syntax structure. Semantics help interpret symbols, their types, and their relations with each other. Semantic analysis judges whether the syntax structure constructed in the source program derives any meaning or not.

should not issue an error in lexical and syntax analysis phase, as it is lexically and structurally correct, but it should generate a semantic error as the type of the assignment differs. These rules are set by the grammar of the language and evaluated in semantic analysis. The following tasks should be performed in semantic analysis:

We have mentioned some of the semantics errors that the semantic analyzer is expected to recognize:

Attribute grammar is a special form of context-free grammar where some additional information (attributes) are appended to one or more of its non-terminals in order to provide context-sensitive information. Each attribute has well-defined domain of values, such as integer, float, character, string, and expressions.

Attribute grammar is a medium to provide semantics to the context-free grammar and it can help specify the syntax and semantics of a programming language. Attribute grammar (when viewed as a parse-tree) can pass values or information among the nodes of a tree.

The right part of the CFG contains the semantic rules that specify how the grammar should be interpreted. Here, the values of non-terminals E and T are added together and the result is copied to the non-terminal E.

These attributes get values from the attribute values of their child nodes. To illustrate, assume the following production:

If S is taking values from its child nodes (A,B,C), then it is said to be a synthesized attribute, as the values of ABC are synthesized to S.

As in our previous example (E → E + T), the parent node E gets its value from its child node. Synthesized attributes never take values from their parent nodes or any sibling nodes.

In contrast to synthesized attributes, inherited attributes can take values from parent and/or siblings. As in the following production,

Expansion : When a non-terminal is expanded to terminals as per a grammatical rule 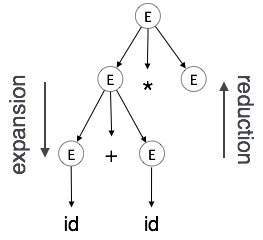 Reduction : When a terminal is reduced to its corresponding non-terminal according to grammar rules. Syntax trees are parsed top-down and left to right. Whenever reduction occurs, we apply its corresponding semantic rules (actions).

For every production, we attach a semantic rule.

If an SDT uses only synthesized attributes, it is called as S-attributed SDT. These attributes are evaluated using S-attributed SDTs that have their semantic actions written after the production (right hand side). 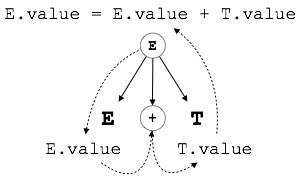 This form of SDT uses both synthesized and inherited attributes with restriction of not taking values from right siblings.

In L-attributed SDTs, a non-terminal can get values from its parent, child, and sibling nodes. As in the following production

Attributes in L-attributed SDTs are evaluated by depth-first and left-to-right parsing manner. 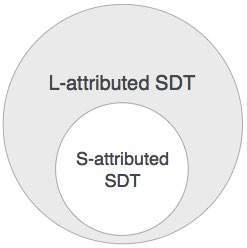