API, an abbreviation of Application Program Interface, is a set of routines, protocols, and tools for building software applications.

Some important features are −

Web Socket solves a few issues with REST, or HTTP in general −

The graph given below shows the time (in milliseconds) taken to process N messages for a constant payload size.

Here is the raw data that feeds this graph −

The graph and the table given above show that the REST overhead increases with the number of messages. This is true because that many TCP connections need to be initiated and terminated and that many HTTP headers need to be sent and received.

The last column particularly shows the multiplication factor for the amount of time to fulfil a REST request.

The second graph shows the time taken to process a fixed number of messages by varying the payload size. 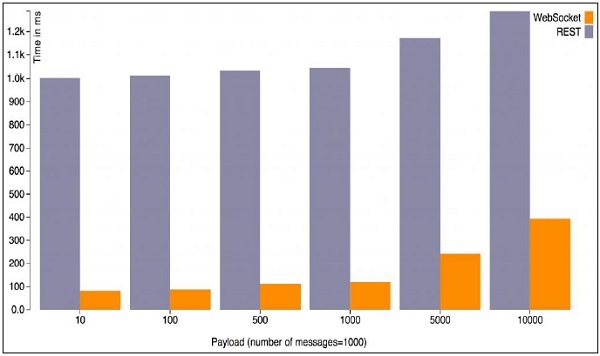 Here is the raw data that feeds this graph −

This graph shows that the incremental cost of processing the request/response for a REST endpoint is minimal and most of the time is spent in connection initiation/termination and honoring HTTP semantics.

Web Socket is a low-level protocol. Everything, including a simple request/response design pattern, how to create/update/delete resources need, status codes etc. to be builds on top of it. All of these are well defined for HTTP.

Web Socket is a stateful protocol whereas HTTP is a stateless protocol. Web Socket connections can scale vertically on a single server whereas HTTP can scale horizontally. There are some proprietary solutions for Web Socket horizontal scaling, but they are not based on standards. HTTP comes with a lot of other goodies such as caching, routing, and multiplexing. All of these need to be defined on top of Web Socket.