The Triangle Law of Vector Addition is the concept that is utilized to add the 2 vectors and is also determined as the method of head-to-tail. This law also helps to calculate the velocity, net displacement, and acceleration. The law helps in vector algebra in order to find the resultant of the sum of vectors where the 2 or more 2 vectors are added. While considering the 2 vectors as P and Q, the angle between them will be θ and their summation can be found by using the formula of the triangle law of vector addition that is provided by the vector R. The formula for direction, ϕ of resultant vector R and magnitude R can be calculated with the formula: $\mathrm{|R|\: =\:\sqrt{(P^{2} + Q^{2}+ 2PQ\: cos\: θ)}}$, and $\mathrm{ϕ \: =\: tan^{-1}[(Q\: sin \:θ)/(P \:+ \:Q \:cos \:θ)]}$.

What is Vector Addition?

The laws of Vector addition

By the method of regular or ordinary algebra, the vector cannot be added as they have both direction and magnitude. Vectors can only be added geometrically and graphically. There are 2 main laws of vector addition that are the Triangle law of vectors and the Parallelogram law of vectors as mentioned below. 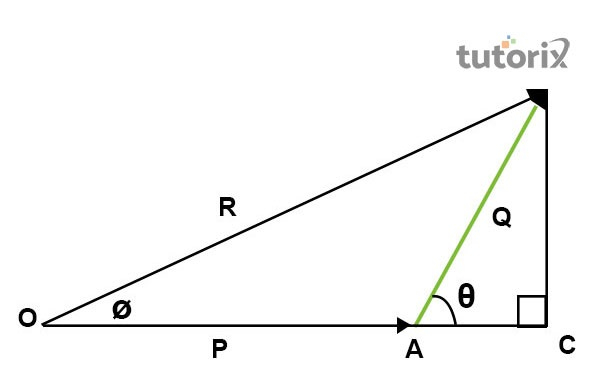 The phenomenon where the 2 vectors are represented in direction and magnitude by the 2 adjacent sides of 1 triangle that is taken in order is referred to as the Triangle law of vectors. Then their resultant is taken in reverse order in the case of the closing side of that triangle (Raskin et al. 2021). In order to derive the resultant of 2 vectors: P and Q acts at the angle θ, has been calculated by the Triangle law of vectors, as denoted in the picture above. 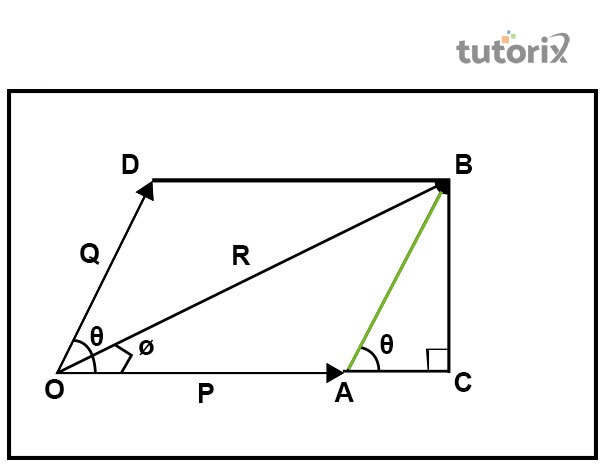 The situation where the 2 vectors are represented in direction and magnitude by the 2 adjacent sides’ of 1 parallelogram is referred to as the Parallelogram law of vectors. Here the resultant represents in direction and magnitude by a diagonal that passes along the common tail of 2 vectors. By considering the two vectors, that are P and Q which are inclined to one another at the angle θ as denoted in the picture above.

The Derivation of Triangle Law of Vector Addition

Law helping in vector algebra and deriving the resultant of the sum of vectors of 2 or more than 2 vectors are referred to as triangle law of vector. In the case of a car, which travels from Point A to point B that can be observed in the picture below. Then, when the car reaches point B, it will start travelling to point C again (Bastos et al. 2021). In this situation, in order to determine the net displacement of a car, concept of vector addition can be used. The car’s net displacement is provided by the AC vector that can be calculated with the help of the triangle law of vector addition. 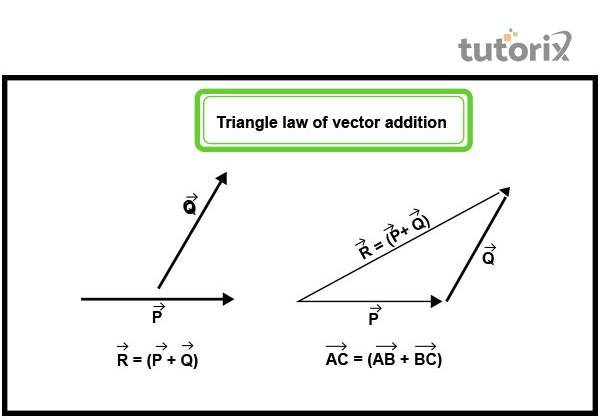 In another case, there are 2 vectors: Q and P as seen in the above picture. Here, in order to derive the vector addition, it is important to find summation of 2 vectors. After that, the Q vector is moved in a way that the direction and magnitude of the vector remain the same as before and its tail joins to the P vector’s head. In this case with the help of the triangle law of vector addition, sum of 2 vectors P and Q can be derived.

Q1. What do you mean by vector summation?

Q2. What are the examples of vector quantities?

Ans. The geometrical entities that have both direction and magnitude are determined as vectors. The examples of vector quantities are displacement, weight, force, and velocity.

Q3. What do you mean by scalar quantity?

Ans. The quantity that only has the magnitude and no direction is determined as the scalar quantity. This physical quantity is described by its numerical value without direction.

Q4. What are the major examples of scalar quantity?

Ans. The major examples of the scalar quantity are time, distance, mass, speed, density, temperature, and volume. All these quantities are only determined by their magnitude.