The IEEE 802.16 is a set of standards that lays down the specifications for wireless broadband technology. It has been commercialized as Worldwide Interoperability for Microwave Access (WiMAX) that is responsible for delivery of last mile wireless broadband access.

The IEEE 802.16 architecture lays down the standards for both physical layer as well as medium access control (MAC) layer for WiMAX. It initially provided data rates of 30 – 40 Mbps. The updated version that came in 2011 provides up to 1 Gbps data rates for fixed stations. It operates in the frequency band of 2 GHz to 11 GHz. The bandwidth is dynamically allocated as per user requirements.

Here, two types of user stations are there −

A user station connects wirelessly to the base station, forming the last wile of the broadband network through the air interface. The base station is responsible for initiating and controlling transmission of frames. Each frame can support both upstream and downstream data. The base station is connected to the backbone network of the broadband service provider. The backbone network is connected to Internet. The architecture is shown as follows − 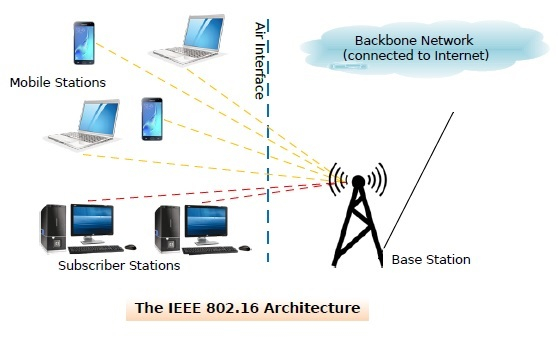