In telecommunications, store − and − forward packet switching is a technique where the data packets are stored in each intermediate node, before they are forwarded to the next node. The intermediate node checks whether the packet is error−free before transmitting, thus ensuring integrity of the data packets. In general, the network layer operates in an environment that uses store and forward packet switching.

The node which has a packet to send, delivers it to the nearest node, i.e. router. The packet is stored in the router until it has fully arrived and its checksum is verified for error detection. Once, this is done, the packet is transmitted to the next router. The same process is continued in each router until the packet reaches its destination.

The following scenario exemplifies the mechanism − 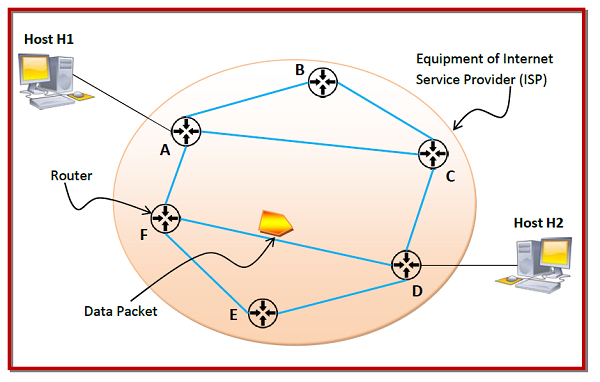 In the above diagram, we can see that the Internet Service Provider (ISP) has six routers (A to F) connected by transmission lines shown in blue lines. There are two hosts, host H1 is connected to router A, while host H2 is connected to router D. Suppose that H1 wants to send a data packet to H2. H1 sends the packet to router A. The packet is stored in router A until it has arrived fully. Router A verifies the checksum using CRC (cyclic redundancy check) code. If there is a CRC error, the packet is discarded, otherwise it is transmitted to the next hop, here router F. The same process is followed by router F which then transmits the packet to router D. Finally router D delivers the packet to host H2.

Store − and forward packet switching ensures high quality data packet transmission. Since erroneous packets are discarded at each router, bad packets or invalid packets in the network are mostly eliminated.

However, error − free packet transmission is achieved by compromising on the overall speed of transmission. Switch latency is introduced due to waiting for entire packet to arrive as well as computation of CRC. Though the latency at each router may seem small enough, the cumulative latency at all routers make it inappropriate for time − critical online applications.