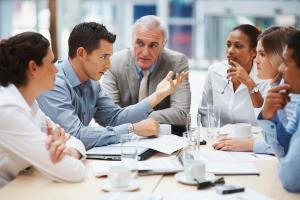 The traditional approach of learning grammar has always been to help you understand what others are saying and at what time they talk.

The idea is to listen carefully for 'content words’ that help us in getting a very basic idea of what the person is talking about. Listen carefully to the entire sentence, picking only those familiar words that you could comprehend, and filter out the rest of the words. Now you have lesser and familiar words to understand the meaning of. Try to arrange the words in a sentence and start paraphrasing.

If you have understood what the speaker was saying, he would respond with a 'yes', or else he would reply back with a much easier version of his original sentence. By doing this you have given him a clear idea of how much of his former sentence you have grasped the meaning of, so that the next sentence he speaks will be directed towards explaining the rest of the information in a simpler way.

Similarly, don't get upset or disappointed when you can't apply all the correct rules of Grammar in spontaneous speech. It's perfectly normal for a beginner to become nervous when you are trying to be fluent and accurate in a non-native language, but the key lies in enjoying the conversation without paying a lot of stress on correctness in the beginning.