Interaction-oriented architecture has two major styles − Model-View-Controller (MVC) and Presentation-Abstraction-Control (PAC). Both MVC and PAC propose three components decomposition and are used for interactive applications such as web applications with multiple talks and user interactions. They are different in their flow of control and organization. PAC is an agent-based hierarchical architecture but MVC does not have a clear hierarchical structure.

MVC decomposes a given software application into three interconnected parts that help in separating the internal representations of information from the information presented to or accepted from the user.

Model is a central component of MVC that directly manages the data, logic, and constraints of an application. It consists of data components, which maintain the raw application data and application logic for interface.

View can be used to represent any output of information in graphical form such as diagram or chart. It consists of presentation components which provide the visual representations of data

A controller accepts an input and converts it to commands for the model or view. It consists of input processing components which handle input from the user by modifying the model. 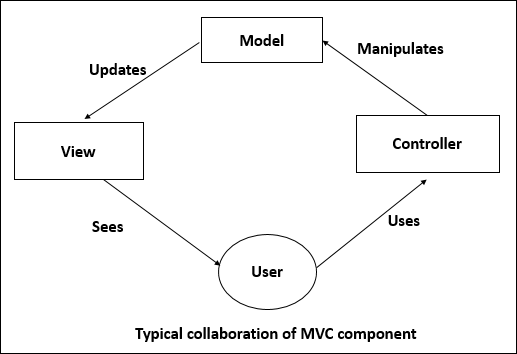 The model module notifies controller-view module of any data changes so that any graphics data display will be changed accordingly. The controller also takes appropriate action upon the changes.

MVC–II is an enhancement of MVC-I architecture in which the view module and the controller module are separate. The model module plays an active role as in MVC-I by providing all the core functionality and data supported by database.

MVC applications are effective for interactive applications where multiple views are needed for a single data model and easy to plug-in a new or change interface view.

MVC applications are suitable for applications where there are clear divisions between the modules so that different professionals can be assigned to work on different aspects of such applications concurrently.

In PAC, the system is arranged into a hierarchy of many cooperating agents (triads). It was developed from MVC to support the application requirement of multiple agents in addition to interactive requirements.

Each agent has three components −

The following figure shows a block diagram for a single agent in PAC design. 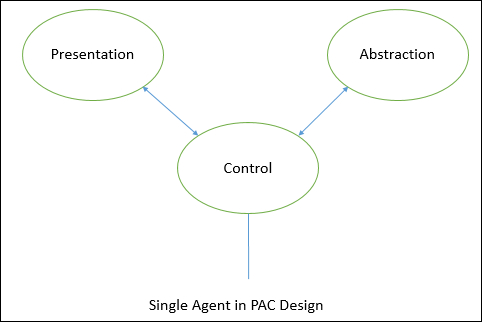 The following figure shows the Multiple Agents that take part in PAC. 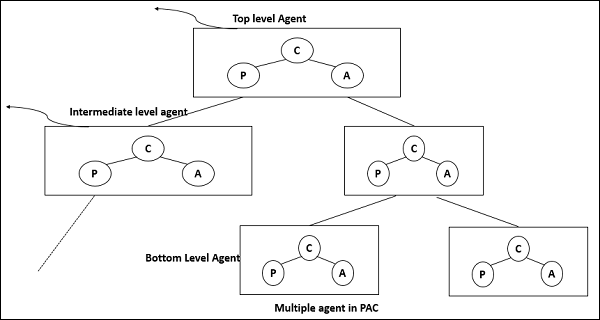