Hierarchical architecture views the whole system as a hierarchy structure, in which the software system is decomposed into logical modules or subsystems at different levels in the hierarchy. This approach is typically used in designing system software such as network protocols and operating systems.

It is also used in organization of the class libraries such as .NET class library in namespace hierarchy. All the design types can implement this hierarchical architecture and often combine with other architecture styles.

Hierarchical architectural styles is divided as −

The aim of this style is to reuse the modules and freely develop individual modules or subroutine. In this style, a software system is divided into subroutines by using top-down refinement according to desired functionality of the system.

These refinements lead vertically until the decomposed modules is simple enough to have its exclusive independent responsibility. Functionality may be reused and shared by multiple callers in the upper layers.

There are two ways by which data is passed as parameters to subroutines, namely − 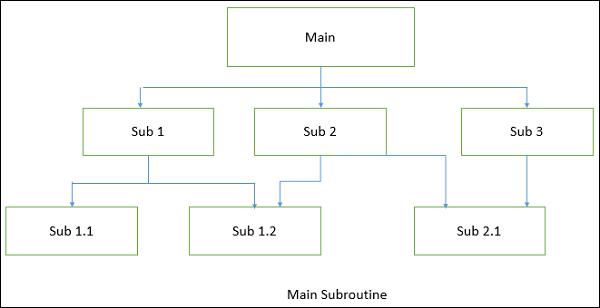 This approach applies the 'divide and conquer' principle and supports fault computation and computational accuracy. It is a modification of the main-subroutine architecture that provides reliability of system and fault tolerance.

In this architecture, slaves provide duplicate services to the master, and the master chooses a particular result among slaves by a certain selection strategy. The slaves may perform the same functional task by different algorithms and methods or totally different functionality. It includes parallel computing in which all the slaves can be executed in parallel.

The implementation of the Master-Slave pattern follows five steps −

Virtual Machine architecture pretends some functionality, which is not native to the hardware and/or software on which it is implemented. A virtual machine is built upon an existing system and provides a virtual abstraction, a set of attributes, and operations.

In virtual machine architecture, the master uses the ‘same’ subservice’ from the slave and performs functions such as split work, call slaves, and combine results. It allows developers to simulate and test platforms, which have not yet been built, and simulate "disaster'' modes that would be too complex, costly, or dangerous to test with the real system.

In most cases, a virtual machine splits a programming language or application environment from an execution platform. The main objective is to provide portability. Interpretation of a particular module via a Virtual Machine may be perceived as −

The following figure shows the architecture of a standard VM infrastructure on a single physical machine. 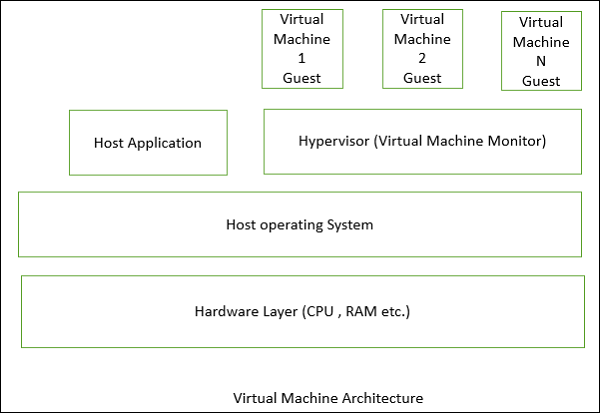 Virtual machine architecture is suitable in the following domains −

In this approach, the system is decomposed into a number of higher and lower layers in a hierarchy, and each layer has its own sole responsibility in the system.

Layered style is suitable in the following areas −