Short Interframe Spacing (SIFS), is the time interval required by a wireless device in between receiving a frame and responding to the frame. It is used in Distributed coordination function (DCF) scheme, which is a mandatory technique used to prevent collisions in IEEE 802.11-based WLAN standard (Wi-Fi).

The duration of SIFS is equal to the sum of delays in radio frequency (RF), Physical Layer Convergence Procedure (PLCP) and processing delay of MAC (medium access control) layer.

In IEEE 802.11 networks, SIFS is the interframe spacing maintained before and after the transmission of an acknowledgment frame and Clear To Send (CTS) frame.

The technique is shown in the following diagram − 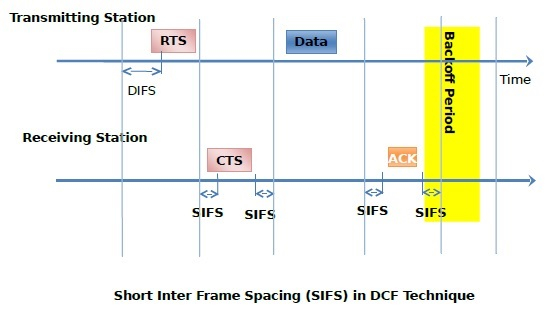