Businesses in India are optimistic about growth of the country's rural consumer markets, which is expected to be growing faster than urban consumer markets. These days, there is better networking among rural consumers and their tendency to proactively seek information via multiple sources to be better informed while making purchase decisions.

Mainly, the wider reach of media and telecommunication services provides information to India’s rural consumers and influencing their purchase decisions. According to general trend, rural consumers are evolving towards a broader notion of value provided by products and services. This involves aspects of price combined with utility, aesthetics and features, and not just low prices. 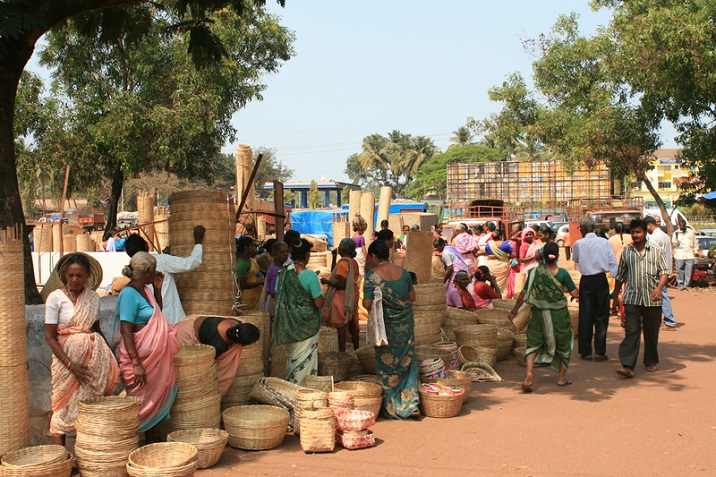 The lands in India consist of about 650,000 villages. These villages are enclosed by about 850 million consumers making up for about 70 per cent of population of our country and contributing around half of the country's Gross Domestic Product (GDP). Consumption patterns in these rural areas are gradually changing to as equal as the consumption patterns of urban areas.

Some of India's largest consumer companies serve one-third of their consumers from rural India. Owing to a favorable changing consumption trend as well as the potential size of the market, rural India provides a large and attractive investment opportunity for

private companies. India’s per capita GDP in rural areas has grown at a Compound Annual Growth Rate (CAGR) of 6.2 percent since 2000.

The structure of the rural market can be defined by interlinking the Product and Consumer flow processes as mentioned in the illustration below. We have taken the buyer and seller to define different systems in rural markets. 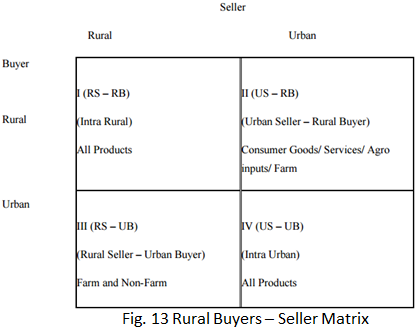 Quadrant I − It explains a situation in which both the buyer and seller are from rural area. This is a constant economy system in which all rural produce is consumed within the system.

Quadrant II − It explains that the majority of people concentrate on Quadrant II situation, which unsustainably is tried by marketers to sell urban products in rural markets.

Quadrant III − It is necessary to develop an urban-rural marketing linkage, so that both urban and rural products can freely move across both the markets. Marketing should work as a process of motivation to deliver and improve standards of living of rural people and consumption rural products by urban people.

Quadrant IV − It explains a situation in which both the buyer and seller are from urban area. This is a constant economy system in which all urban produce is consumed within the system.

Rural India accounts for a total of 55% of the manufacturing GDP. They were host to nearly 75% of the new factories built in the last decade. Rural consumption per person has increased by 19% yearly between 2009 and 2014.

Rural marketing strategies include the following −

The following are the degrees of segmentation −

Consumer behavior is a crucial area to be delved upon by the companies. The mindset of the rural consumer is completely different from that of the urban consumer. In urban market, to buy an electronic item, the customer thinks of brand and its updated feature, whereas in rural market a buyer thinks of money, durability, buying capacity and so on. The bottom line is that the mindset makes a lot of difference in both the markets.

Market is a place where buyers and sellers exchange goods/Service for some value in return such as money. So, the market is same everywhere. But, the difference is in the behavior of the consumer. There will be different buyers in each market. This is because of different factors which Influence them, the same way there is a difference between rural and urban market.

India has been acknowledged as one of the most promising and fastest growing economies of the world. Besides urban and semi-urban areas, rural India has a huge potential. Many foreign brands are dominating in consumer durables category. The purpose of the study is to understand the comparative behavior of rural and urban Indian consumers towards the foreign products against Indian products.

Rural consumers were found to be more interested than their urban counterparts in foreign products in terms of maintenance, services, technical advancement, prestige, durability, performance, and wide choice of size and variants. No significant differences were observed between rural and urban consumers in terms of style and appearance. Indian producers in the coming times are going to face very strong threat from foreign brands, particularly in consumer durable category because of the consuming behavior.

The competition in the market for brands and companies always differ as in rural markets, it is always the channel Partner and Retailer plays a vital role. But where as in Urban Market Brand plays a great role.