The root mean square of the current value is instantaneous. This value of the alternating current is denoted as a value of a stable current. this steady current helps in the generation of an equal amount of heat in a particular resistance within a given period as it is done by a.c current. This happens in the same manner when the ac is regulated across a similar resistance for the same period.

What Is Alternating Current?

The value of an alternating current can be illustrated as a current flow that alters its magnitude and value of polarity at the regular time intervals. As opined by schavemaker & van der sluis (2017), this form of current can further be defined as the electrical current that changes continuously or it can reverse its direction. This aspect is totally opposite to that of direct current which forever flows in one particular direction.

The value of the alternating current (ac) , tends to attain its maximum value and then gradually drops back to zero after the completion of the positive cycle. The particles then change their direction and attain the maximum in an opposite direction after which the alternating current again changes to that value as it was originally, this change occurs after the completion of one negative state. This cycle continues to repeat itself. 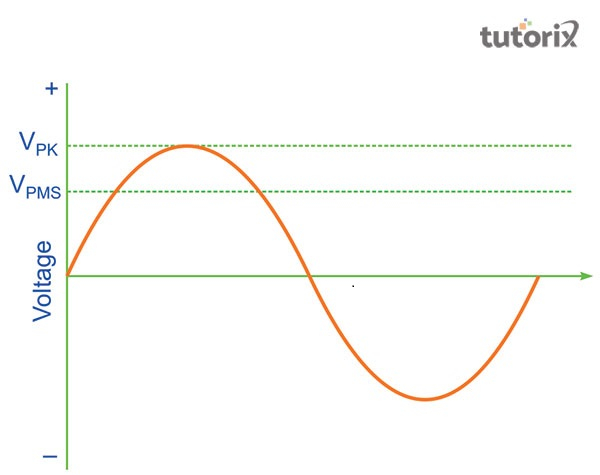 Alternating current is capable of travelling longer distances than direct current without additional loss of energy.

The audio amplifiers deal with music signals or analogue voices that lead to the production of irregular ac waves.

The root mean square value is denoted as the square root of the means of squares of the values that are instantaneous. According to taheri & razavi (2018), this can further be described as a given amount of alternating current power that liberates the same heating effect as the dc power it is equivalent to.

The alternating current is the most efficient form of a flow of current that is used in home and office areas because of its efficiency through an expanse without losing much energy. The root means square of the waves of this alternating current is noted by its instantaneous values. This value of the current is denoted by the direct current that flows through a particular resistance. In comparison to the average value, the root mean square value is always higher. This Rms value is applicable in all the forms of waves including sinusoidal, symmetrical, non-sinusoidal and asymmetrical waves.

Q1. What Is The Nature Of The Normal Waveforms Of Alternating Current?

Q2. How Can One Obtain The RMS Values Of Alternating Current?

Q3. What Is The Use Of The RMS Value In An AC Source?

Ans. The RMS Value of the AC source determines its efficiency. The Root Mean Square value of a particular Alternating Current Source helps in the determination of its capability of Energy Transfer.

Q4. How Is AC More Helpful Than DC?