The radiation detector's development has been initiated with the transistor's invention. The recent detectors utilise calorimeters for the calculation of detected radiation energy. The plates of photography were utilised to recognise the left of tracks by the interactions of nuclei. The plate of photography can be placed in the way of a beam or material of radioactivity.

Fogged may be visible or considered from the radiation exposure when the plate has been developed. In the earliest time, the electroscope was the main utilised radioactive detector. These were mainly used as a gold leaves pair that might get charged by the process of iodisation caused by radiation and repelling the other.

What is a radiation detector?

The dose of radiation absorbed by the human body is generally calculated utilising the traditional unit rad or gray (Gy) which is the SI unit.

The detection principle works since the earth performs a shield against all the elements except neutrinos. Radiation measurement is the important thing which works on the principle of communication between substances and radiation. The ionisation of atoms of gases is caused when the radiation passes within the detector dissecting the atoms into positive electrons and ions.

The separated positive ions and electrons are to electrode attachment reasoning the flow of current (Xie et al. 2020). This is altered into electrical signals which are then calculated as the radiation amount. Most of the silicon detection of radiation works in principle by narrowing the strips of silicon to change them into diodes which are then biased reversely.

Scintillation detectors of radiation − This type of radiation detector utilises the light energy level generated when the radiation communicates with the object to ultimately implement the radiation level. The light of the scintillator reflects shortly in the duration which permits the device to capture the large particle numbers in the shortest time. 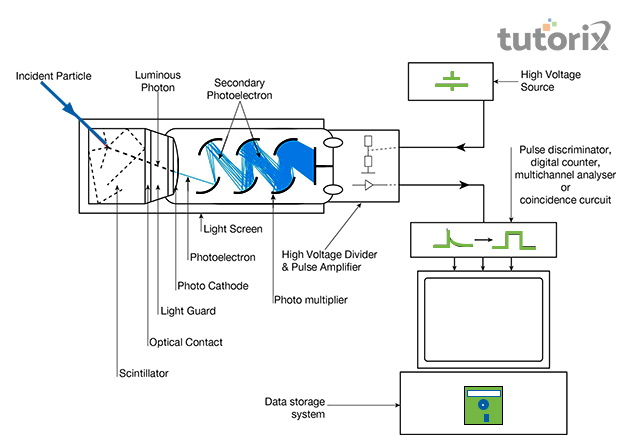 The free electrons are greatly captivated by the largest positive potential of the next plate within the photomultiplier. It then causes the emission of more electrons to be flowed down that tube to successive dynodes (Liu et al. 2020).

The process is again repeated with amplification in electron numbers emitted at every dynode. Light energy in a Scintillation radiation detector is directly comparable to the radiation amount of energy that entered the detector.

Gas-filled detector of radiation − This type of radiation works depending on the ionisation impact that happens when the radiation flows through the air or particular gas. The radiation of ionisation may cause the free electrons and positively charged ions production that are stripped from the gas atom if the potential difference of high voltage is applied to the containing air. 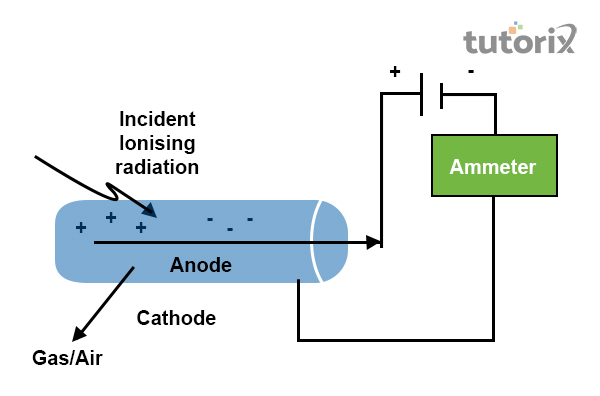 The potential difference of electricity may emerge from the positive ions in accumulation to the free electrons and cathode to collect at the detector's anode (Hennig & Hoover, 2021). The accumulation of charged particles results in the flow of a small current which may be sensed or displayed by the detector as the output of the signal.

Solid-state detector of radiation − This type of detector performs utilising the principle of ionisation within the device of semiconductor. It contains major two types including p-type and n-type (Xie et al. 2020). The materials comprise atoms that have the carriers of charge which are considered holes or electrons which are the electrons' absence. 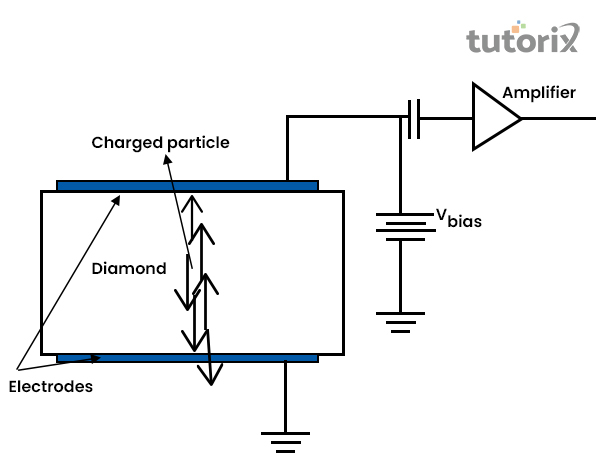 Radiation detector often referred to as a particle detector is a device that helps in facilitating the identification and detection of particles of high energy. Relying on the device arrangement, the photography plates can be configured in calculating the beta or alpha particles which were a valuable tool for early research involving the facts of radioactivity. Materials of Scintillation can be solids or liquids, and when the emerging radiation hits the object, photons are emitted into a device called a photomultiplier tube.

Q1. What is the usage of a solid-state detector of radiation?

The solid-state radiation detector helps in giving the signal by accumulating the liberation of charge in the particles' passage through the semiconductor. Particularly strips in suitable implanted electrodes apply the field of electric drift in which the charges of ionisation are a detectable signal.

Q2. What is the use of vacuum tubes in Scintillators?

A scintillator is one type of radiation detector. In scintillators, the vacuum tubes help in changing the light into electric pulses.

Q3. What is the distinct classification of radiation?

Radiation is defined as energy that emerges from the source and passes through space at light speed. Alpha, Beta and Gamma are the main radiations classifications.

Q4. How can homes be tested for radiation?

The compact dosimetry for households is generally recommended for testing purposes. It is utilised extensively for the protection of human radiation and for calculation for both industrial and medical purposes.