In this article, we will learn about the solution to the problem statement given below.

Problem statement − We are given a number, we need to check whether the given number is a prime number or not.

A given positive number greater than 1 which has no other factors except 1 and the number itself is referred to as a prime number. 2, 3, 5, 7, etc. are prime numbers as they do not have any other factors.

In this program below, the number is checked about its prime or non-prime nature. Numbers less than or equal to 1 can not be referred to as prime numbers. Hence, we only iterate if the number is greater than 1.

Now let’s observe the concept in the implementation below− 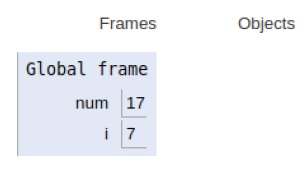 All the variables are declared in the local scope and their references are seen in the figure above.

In this article, we have learned about the python program to check whether the given number is prime in nature or not.