The type of penetration testing normally depends on the scope and the organizational wants and requirements. This chapter discusses about different types of Penetration testing. It is also known as Pen Testing.

Following are the important types of pen testing − 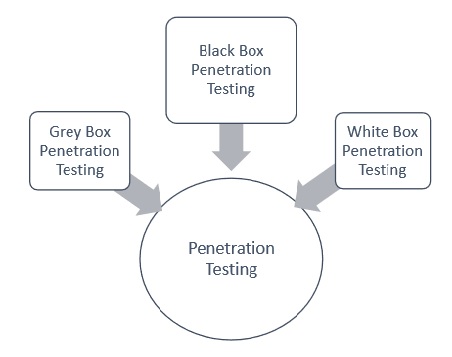 For better understanding, let us discuss each of them in detail −

In black box penetration testing, tester has no idea about the systems that he is going to test. He is interested to gather information about the target network or system. For example, in this testing, a tester only knows what should be the expected outcome and he does not know how the outcomes arrives. He does not examine any programming codes.

It has the following advantages −

This is a comprehensive testing, as tester has been provided with whole range of information about the systems and/or network such as Schema, Source code, OS details, IP address, etc. It is normally considered as a simulation of an attack by an internal source. It is also known as structural, glass box, clear box, and open box testing.

It carries the following advantages −

In this type of testing, a tester usually provides partial or limited information about the internal details of the program of a system. It can be considered as an attack by an external hacker who had gained illegitimate access to an organization's network infrastructure documents.

It has the following advantages −

Penetration testing is normally done in the following three areas −