Panchayati Raj is an Indian administrative structure that governs rural local self-government. Panchayat raj is made up of institutions known as PRIs (Panchayat Raj Institutions) which allow rural communities to self-govern. Social justice, Economic growth, and the implementation of Central and State Schemes, including the 29 areas listed in the Constitution's Eleventh Schedule, are their responsibilities.

Panchayats, or village assemblies, were self-governing entities with distinct and well-defined roles in ancient India. The Panchayat system reflected not just the collective desire of the rural society, but also its collective knowledge. The introduction of a highly decentralized method of dispensing justice during British control altered the situation, and the local Panchayat system suffered a blow.

By 1925, however, eight provinces had approved Panchayat Acts, and six native states had passed them by 1926. New privileges were granted to local governments, but their capacity to charge taxes was limited. Institutions and systems of local self-government, on the other hand, were unharmed. However, with independence and the drafting of the Constitution, the Panchayati Raj System gained a considerable boost.

Article 40 of the Indian Constitution states, "The state shall endeavor to create village panchayats and equip them with the necessary authority to allow them to act as self-governing bodies." Article 246 also empowers the state legislature to pass legislation on any matter related to local self-government.

There were numerous committees established in different time zones to evaluate the self-governance module for rural areas and suggestions were also asked to achieve the goals of the panchayat raj system..

The following committees were formed

Balwant Rai Mehta was one of the country's legendary freedom fighters who took part in the Bardoli Satyagraha. He is well known as Gujarat's second Chief Minister. When the committee was formed, Balwant Rai Mehta was a member of parliament. He is bestowed as Father of Panchayat Raj for originating the concept of Panchayat Raj in India. According to his committee, PRIs or Panchayati Raj Institutions had the potential to play an important role in community development initiatives across the rural areas of the country. Therefore, to achieve the goals of democratic decentralization and distribution of power at the grassroots can be achieved through effective rural engagement and well-planned programs.

India's then Prime Minister, Pt. Jawaharlal Nehru, had strong support for establishing panchayat raj institutions in India. He said, "...authority and responsibility must be entrusted to the people in the villages... Give the panchayats more power." 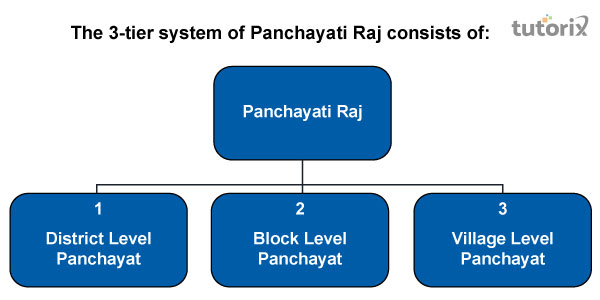 Figure: The three-tier system of Panchayati Raj in India

It is a community organization dedicated to the village's well-being. The Panchayati Raj governance system's basic administrative entities are Gram Panchayats. The average number of members is seven to thirty-one; rarely, groupings are larger, but they never have less than seven. Members of the gram panchayat are referred to as gram panchayat sadasya or panch and the head of the council is called as Sarpanch. Each villager can participate in the government of his community under such a system. Decisions are made without going through a lengthy legal process

The village Panchayats' major sources of revenue include the collection of taxes on dwellings, marketplaces, and other structures, as well as government scheme funding obtained through the Janpad and Zila Panchayats, and donations for community projects

The Panchayati raj system is known as Zila Parishad at the district level. It is responsible for the administration of the district's rural areas, and its office is situated in the district headquarter

The "District Magistrate", "District Collector," or "Deputy Commissioner" is in charge. All Panchayat Samitis are led by members of the Zila Parishad. These district-level panchayats serve as a connection between the state government and Panchayat Samiti

Members and chairpersons are chosen directly at all levels of the Panchayati Raj system, whereas chairpersons at the district and intermediate are elected indirectly. Except for Nagaland, Meghalaya, Mizoram, and Delhi, all Indian states and union territories have adopted the Panchayat Raj system.

There are several other locations where the panchayat raj system is yet to be established, these are

village communities and their inhabitants. To add to this objective, the BPL list came into effect. The government asseThe Panchayat raj system was created with the primary objective of benefiting sses how much money a person needs to live a good life based on the cost of essential necessities. Those who do not make even that much money is considered to be below the poverty line (BPL list).

Land ownership, kind of residence, clothes, food security, means of livelihood, sanitation, consumer durables, literacy status, workforce, reasons for migrations, children's status, type of indebtedness, and so on are used to define a BPL family. The Panchayat Raj Institutions are also in charge of regularly updating the BPL and imparting the benefits to the registered individuals on the list.

The Constitutional (73rd Amendment) Act of 1992, which gave constitutional standing to Panchayati Raj institutions, went into force on April 24, 1993. This amendment provides for the devolution of responsibilities and power to panchayats, including the ability to collect and levy appropriate duties, tolls, fees, and taxes as well as the preparation of social justice and economic development plans

This Act aims to establish the panchayat raj system and conduct panchayat elections every 5 years for the states with a population of over two million people. Some provisions of the acts provide the right of contesting elections for SC-STs and women. The Act also ensures the appointment of a State Finance Commission for suggesting the actions to improve the Panchayats' financial powers and to establish a District Planning Committee

Q1. Which of the Indian states and UT have no panchayat raj setup?

Q2. Who is renowned as the father of panchayat raj in India?

Q3. When and how was the panchayat raj system formalized?

Ans: Panchayat raj system was formalized and given constitutional status by the 73rd Amendment Act of 1992.

Q4. How many levels does the panchayat raj system have?

Ans: Panchayat raj system is divided into three levels based on the recommendations of the Balwant Rai Mehta committee; Gram Panchayat, Mandal Parishad or Block Samiti, and Zila Parishad.

Q5. Which Indian state was first to implement the panchayat raj system post-independence?