Managing object memory is a matter of performance; if an application doesn't free unneeded objects, its memory footprint grows and performance suffers.

In MRR, we explicitly manage memory by keeping track of objects on our own. This is implemented using a model, known as reference counting, that the Foundation class NSObject provides in conjunction with the runtime environment.

The only difference between MRR and ARC is that the retain and release is handled by us manually in former while its automatically taken care of in the latter.

The following figure represents an example of how memory management work in Objective-C. 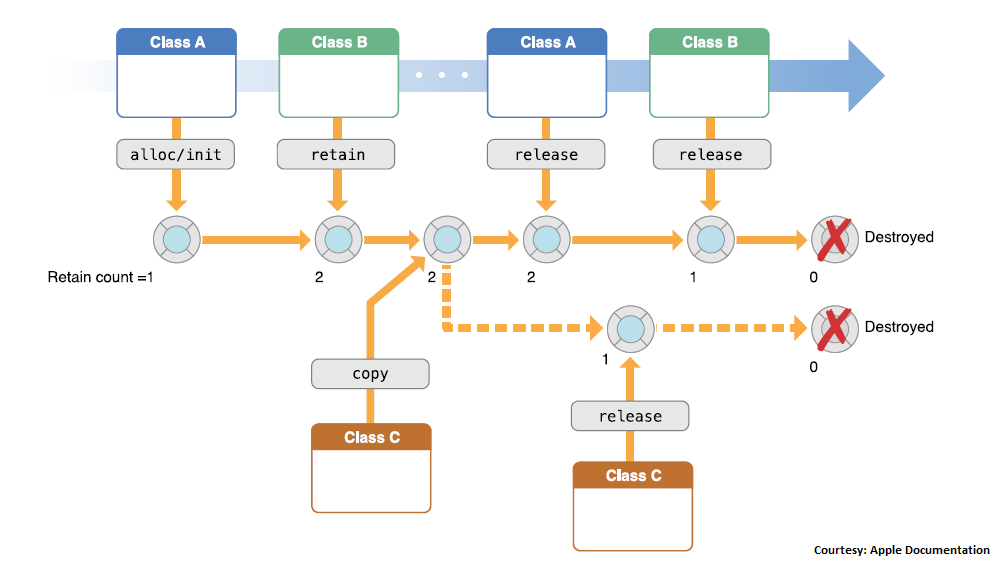 Then, Class C makes a copy of the object. Now, it is created as another instance of Class A with same values for the instance variables. Here, the retain count is 1 and not the retain count of the original object. This is represented by the dotted line in the figure.

The copied object is released by Class C using the release method and the retain count becomes 0 and hence the object is destroyed.

In case of the initial Class A Object, the retain count is 2 and it has to be released twice in order for it to be destroyed. This is done by release statements of Class A and Class B which decrements the retain count to 1 and 0, respectively. Finally, the object is destroyed.

When we compile the above program, we will get the following output.

In Automatic Reference Counting or ARC, the system uses the same reference counting system as MRR, but it inserts the appropriate memory management method calls for us at compile-time. We are strongly encouraged to use ARC for new projects. If we use ARC, there is typically no need to understand the underlying implementation described in this document, although it may in some situations be helpful. For more about ARC, see Transitioning to ARC Release Notes.

As mentioned above, in ARC, we need not add release and retain methods since that will be taken care by the compiler. Actually, the underlying process of Objective-C is still the same. It uses the retain and release operations internally making it easier for the developer to code without worrying about these operations, which will reduce both the amount of code written and the possibility of memory leaks.

Here is a simple ARC example. Note this won't work on online compiler since it does not support ARC.

When we compile the above program, we will get the following output.