The well-ordered and perhaps the most reusable way to organize your code is to use the 'MVVM' pattern. The Model, View, ViewModel (MVVM pattern) is all about guiding you in how to organize and structure your code to write maintainable, testable and extensible applications.

Model − It simply holds the data and has nothing to do with any of the business logic.

ViewModel − It acts as the link/connection between the Model and View and makes stuff look pretty.

View − It simply holds the formatted data and essentially delegates everything to the Model.

To avoid the problems caused by putting application logic in code-behind or XAML, it's best to use a technique known as separated presentation. We're trying to avoid this, where we will have XAML and code-behind with the minimum required for working with user interface objects directly. User interface classes also contain code for complex interaction behaviors, application logic, and everything else as shown in the following figure on the left side. 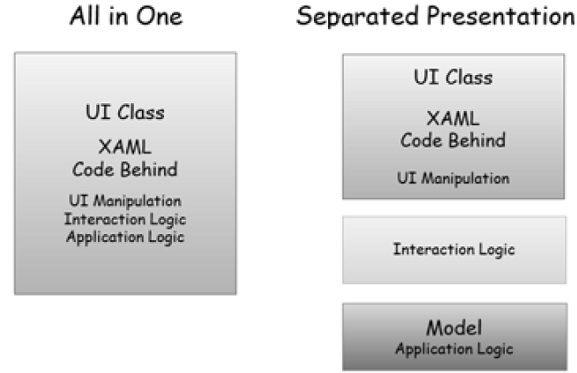